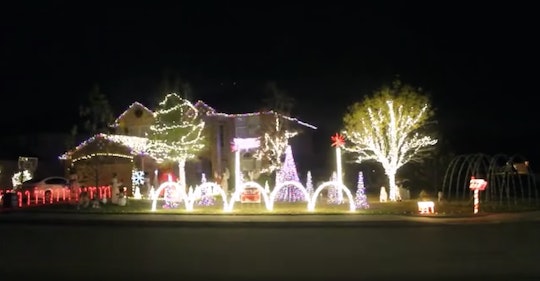 Just when you thought that the Baby Shark song couldn't become more pervasive, it outdoes itself. Swimming from your smartphones and televisions to a neighborhood near you, Baby Shark is coming for you. Really, this family's Baby Shark Christmas lights display will have you singing "do do do do" all throughout the holiday season.

The Hinojosa family of Boerne, Texas uses their holiday light display to raise money for local charities. Last year, they put on a Selena tribute, Parents reported. But this year, they are honing in on what may be an even bigger draw for crowds: the painfully catchy Baby Shark song. According to local news station KENS5, after hooking their lights up to their sound system and upping their light count from 60,000 to 100,000, they blasted Baby Shark for all to hear.

The homeowner Benjo Hinojosa has been putting on holiday light shows for four years now and he is dedicated to his mission, according to Parents. Hinojosa's house is on display every day of the year, going on Sunday through Thursday, from 5:30 to 10 p.m. local time and Friday and Saturday until 11:00 p.m. I can't even imagine how ingrained that song is in Hinojosa's head by now, but there's no arguing that he is in touch with what the people want.

The Baby Shark song has been around for more than two decades, according to The Washington Post, but it only became an internet sensation in recent years. The video that shoved the song into the spotlight for kids everywhere came is a product of the popular Korean-based YouTube channel Pinkfong. Released in November 2015, the Baby Shark video went viral and has since become one of YouTube's Top 40 most-viewed videos of all time, according to The Independent. The original video has racked up more than 1.6 million views on Pinkfong's official YouTube channel, Jamie Oh, director of global marketing and partnerships at SmartStudy told The Washington Post.

The song has been translated into 11 languages and was the top song on iTunes, Apple Music, Google Play and Amazon, according to Oh. And inspired by the Pinkfong dance accompanying the song, many people have recorded and shared their own spinoff home videos, posted with the hashtag #BabySharkChallenge, as the BBC reported. But the Hinojosa family took the challenge a bit further and seriously upped the game with their lights.

For those in the local area, the official Hinojosa Family Lights Facebook page — which has almost 14,000 followers and posts regular updates on the family's light show — advises you to tune into the radio station 93.1 FM to listen to the music. The show starts every 30 minutes with a 10 minute break in between. Aside from weather delays and cancellations, the show runs every day of the week. And on some weekends, the Hinojosa family comes out with hot chocolate and candy canes for their visitors.

Along with Baby Shark, songs from Coco and last year's Selena hits are on the Hinojosa's 2018 playlist. No matter what song is playing when you go by, the Hinojosas ask that you contribute to their family donation box. This year, the donations go to help local veterans and their families via the nonprofit Warrior Chef, as KENS5 reported. Ultimately, giving back is one of the family's main reasons for putting up their lights — along with providing entertainment, of course. "Thank you to all who gave a donation to make Christmas just a little brighter for families in need," the family wrote in a Facebook post.

While the prospect of hearing Baby Shark play again — and get stuck in my head for another month — isn't all that appealing, the Hinojosa's heartwarming holiday mission definitely is.