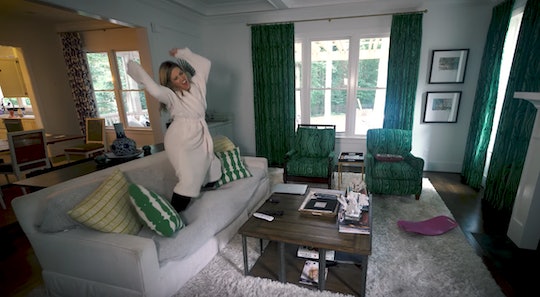 Penn and Kim Holderness created "In the Tub" with the help of their two children, Penn (Jr.) and Lola. Rapped to the tune 50 Cent's "In Da Club," the parents — who both formerly worked in television — recount the stress of entertaining their kids all summer and the joy of having them head back to class. It is, truly, a work of art.

After dropping their kids off at school in the video, with a sweet "We're going to miss you so much!" from Kim, Penn raps:

You can find her in the tub, got a lot of bub because summertime was rough and her blood pressure was up, but she got six hours until she gotta pick 'em up, so give yourself a hug and chill out on the rug.

This isn't the Holderness' first back-to-school parody. Last year, they parodied DMX's "Party Up (Up in Here)," and they nailed a back-to-school version of Sir Mix-A-Lot's "Baby Got Back" in 2014. They have zero qualms with being honest about wanting their kids out of the house come August, and it's both refreshing and super relatable.

In last year's parody, they made sure to thank their kids' teachers during a brief intermission, as well. "We know your hands are going to be full," Penn said, "and we know they are going to be in great hands."

Having some extra time with kids can be great, but summer break often means extra stress for parents — there's extracurriculars to be scheduled (and paid for), schedules to be juggled, vacations to be planned, and an endless stream of "But I'm boooooored" complaints to be dealt with.

It's now back-to-school season, though, which means there's now some time for the tub, Bacardi, online shopping, and Game of Thrones. I mean, yes, moms and dads will most likely have to work, too — but after an entire summer break of madness, at least one mental health day is in order after kids are back in class. Until then, may I suggest playing "In the Tub" on repeat?