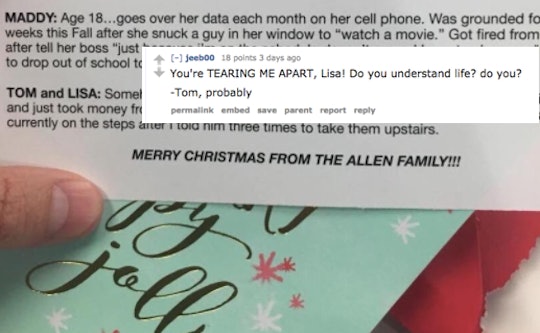 Each year, I receive a slew of holiday cards with professional-quality photos of smiling families. Oftentimes, the senders will include highlights from the past year. "Emma made the cheerleading squad and was on the honor roll every single quarter." Or, "Parker loves soccer and reads at a third-grade level." And of course, "Josh got a huge promotion at work and we are so #blessed." Don't get me wrong; I love keeping up with friends and family from afar, and these cards are very much appreciated. It's just that, well, they're not exactly the most realistic version of life — more like a highlight reel. That's why this family's brutally honest Christmas card is seriously a breath of fresh air.

In a Reddit thread titled, "Brutally honest Christmas card," a typed piece of paper with a blurb about each member of the Allen family, basically wins holiday cards this season. Here's what was written about the youngest member, Landon: "Our precious and super annoying 3yr old. Whines all the time and doesn't go to sleep when he's told. Cries when he doesn't get Gushers after dinner. Most of the artwork he brings home from church nursery is awful. Our pride and joy (and source of our drinking problem.)" If this doesn't perfectly sum up most 3-year-olds I've known, I'm not sure what does.

Here's what was said about their son, Hunter: "Our energetic yet surprisingly unathletic 9yr old who just got cut from a soccer team that doesn't even keep score in their games. I know ... how does that even happen?! Spends most of his time on his iPad and said his first swear word this year! Super exciting!" LOL. Poor non-athletic Hunter. One thing, though: He seriously just said his first swear word at age 9? Pshht. My kids were saying sh*t by age 2. (They may or may not have been parroting their mama.) Other than that, Hunter sounds like a pretty average 9-year-old.

Maddy: "Age 18 ... goes over her data each month on her cell phone. Was grounded for two weeks this Fall after she snuck a guy in her window to 'watch a movie.' Got fire from Sefora[sic] after tell [sic] her boss 'just because i'm [sic] on the schedule doesn't mean I have to show up.' Wants to drop out of school to become insta famous." I feel you on always going over your data each month, Maddy. But yeah, I'm going to go out on a limb and guess the "watch a movie" was more like "Netflix and chill."

Tom and Lisa: "Somehow still married after 41 years. Tom still tucks his t-shirts into his jeans and just took money from our retirement account to buy a fishing boat. His golf shoes are still currently on the steps after I told him three times to take them upstairs." Oh, Tom. My husband does the same thing with socks; he just leaves them lying around randomly. It's beyond infuriating.

Plenty of Reddit users seem to love this quirky holiday card. "I believe all Christmas cards should be like this lol," one user wrote. "If a aunt or cousin sent me something like this, I would genuinely feel better about my life," one person commented. "Kudos to Lisa."

Honestly, I just have one tiny issue with the Allen's brutal honest Christmas card: I really wish Lisa would have written a blurb about herself, too. And I'm not the only one who thought so. "I'd love it if not for the fact that there's nothing negative about the mother," a Reddit commenter pointed out. "It really detracts from the tongue-in-cheek humor when you realize that it's basically just some mom bitching about her family to all their friends and relatives."

If this card really was sent out to friends and family of the Allens, I'm super curious: What was the overall reaction? Were older folks horrified? Were people amused? Offended? Did anyone find it as hilarious as random internet strangers have? All I know is I'd much rather receive cards like this during the holiday season — instead of thinly-veiled humble brags any day. Props to this family for keeping it real this holiday season.