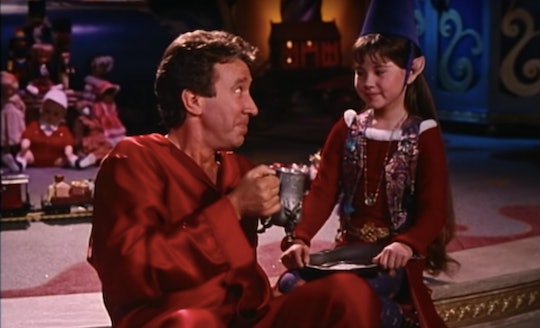 There are a lot of creepy things going on in family movies that you never noticed as a kid. It's probably better that way, especially after you hear this creepy fan theory about The Santa Clause that will change everything you felt about Christmas. It's really out there, so if you're a lover of the classic Tim Allen holiday flick, you might want to go somewhere else for a bit. Because once you hear this, you won't be able to not see it every single time you catch it on some cable network.

Before we get into the theory, let me refresh your memory a bit about the premise of the films. The trilogy all began in 1994 with the original film in which a man named Scott Calvin, played by Tim the Tool Man Taylor, who accidentally kills Santa Claus on Christmas Eve. A note falls out of Santa's pocket that tells Calvin to put the suit on "and the reindeer will know what to do." He then becomes Santa, transported to the North Pole, and meets all the elves.

In the second film, the elves discover another "clause" that insists Santa has to be married. In the third film, Jack Frost manifests and tries to get Santa to renounce his jolly old job in the "escape clause." While this isn't all that intellectually demanding, the fan theory is intense AF. One Twitter user thinks the elves are burning humans and elves and turning them into ceremonial hot chocolate.

I mean, "clearly" is a pretty bold statement. But she makes some really good points! For one, there's the whole fact that Santa Claus literally dies right in front of our merry and bright little eyeballs. That's really messed up for a family movie.

Then, no one even cares that he's dead! "Bernard [the head elf] just refers to him as 'the other Santa' and shrugs it off. They just cold-heartedly accept that roof-Santa is gone, and now they work with Scott," this genius writes.

It's not just human Santas either. "In [the first movie], Judy [the elf] says she's spent the last 1200 years perfecting her cocoa recipe. But she's no where to be seen in [the second film]. She's just casually replaced with another cocoa-maker & never mentioned again," Hannah writes. She adds that the beloved Bernard doesn't even make it to the third installment despite his pivotal roles in the first two.

Then, it just gets really bad when you start to consider the women. Like, where was the first Mrs. Claus when Calvin took over? How come no one knew about the marriage clause until the second installment.

And we know that Santas are fertile in the North Pole, which means no one knows if Buddy Claus was the first one ever born there. What happened to them? Well, she's figured that out, too. It all comes back to the oven. Yep, an oven.

"Why would the elves need a massive oven? Santa delivers toys, not baked goods. Now think about how wryly the elves smile whenever someone comments on the flavor of their cocoa," she adds. When you think about it, it makes so much sense. The big oven, the "perfected" cocoa recipe, and all of the missing elves, Missus Clause's, and complete lack of mourning for all of the Santa before Calvin takes over? It all adds up, right?

Surely, there are other, less creepy reasons for the oven and missing people. Romper's request for comment from Disney wasn't immediately returned, but things like casting issues over the course of decades (the third movie didn't come out until 2016) or the fact that they have to make dinner for all the elves in that big ol' oven certainly could explain a lot.

But this theory is so perfectly worked out, let's just roll with it.