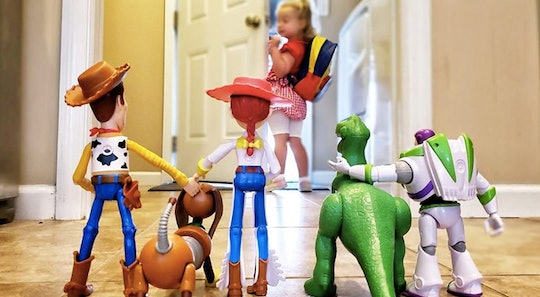 After a long summer, September is finally here and parents everywhere are dusting off the backpacks and sending their kiddos off to school. And while most social media feeds are currently crammed with staged and impromptu back-to-school photos alike, some truly stand out from the pack. Just one example? Feast your eyes on this mom's back-to-school photo idea, which is a creative and adorable homage Toy Story. Needless to say, this shot has taken the franchise's fans to infinity and beyond.

A Facebook user by the name of Ashley M. took this Toy Story-themed photo to commemorate her 3-year-old daughter Hannah's first day of preschool. She posted the amazing pic in blogger Jill Krause's private Facebook group, Picture Play, a place for parents to "learn how to capture and create beautiful photos" with their "phone" and "cheap apps." Incredibly enough, Ashley used her own iPhone to take and edit the image into something incredible.

In the photo, you can see the backs of Buzz, Woody, Jessie, Rex and Slinky Dog in the foreground as they watch their beloved child head out the door to her first day of school. To infinity and beyond, or in this case, preschool!

"Hanna loves Toy Story so I wanted to try getting them in a picture for her first day of school and this picture just sort of evolved," Ashley M. told POPSUGAR about her inspiration for the shot. "I'm not going to lie, it came out even better than I imagined!"

Hats off to Ashley M., guys. Not only is the picture perfect, but it's a great way to capture Hannah's childhood and interests in one fell swoop.

As for parents' reactions to the photo? So far it has received tons of traction and everyone is feeling all the feels right about now.

Age was not a problem for this mom, who said: "I kind of want to do this with Kathy and all of the dolls. I know she's older, but it would still be fun."

"This hits me in the feels every time!" someone else chimed in.

Others stated the obvious, with one commenter saying: "Omg how freakin cute!!!!"

Many tagged their friends, suggesting it as a future back-to-school photo opp.

Although the first Toy Story movie was released in 1995, the recent popularity of the franchise among toddlers might have something to do with the release of Toy Story 4 in June 2019. This installment follows the original crew as they prep their new child, Bonnie, for her first day of school. When Bonnie brings home her new craft-project-turned-toy, Forky, the gang must teach him the ways of the toy box.

While the toys are always on some sort of new adventure throughout the entire franchise, one theme remains constant — they are there to support the child on the road to adulthood. Queue the water works, right? Any parent who has ever sent their child off to school has probably felt those pulling of heart strings firsthand.

If you want to take your own Toy Story themed back-to-school pics but aren't as skilled in the camera department, you can always head over to Etsy or Pinterest for some themed props and ideas. It might come out better than you imagined, just like Ashley M.'s shot.

Back-to-school season can be an emotional time for parents because it's a visual reminder that their kids are growing up. So adding a little levity with a child's favorite fictional movie characters is sure to give this bitter sweet moment a touch of much needed whimsy.