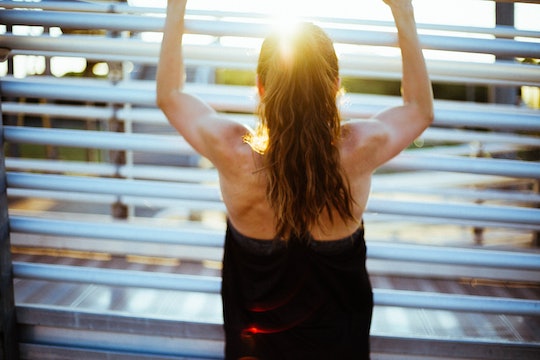 This Fit Mom Is Over Pregnancy Body Shaming

If you're a mom looking to get in shape, social media can be a great source of inspiration — these days, it seems like there are an infinite number of buff fitness model mamas with seriously impressive Instagram feeds proving that it is actually possible to reach your post-pregnancy fitness goals, whatever they are. But while the popularity of Instagram "fit moms" has meant that many of them have thousands, if not millions, of followers, it's also made them targets for some pretty intense online judgment, including plenty of snarky criticism about their bodies. But this fit mom's Instagram post is a reminder that pregnancy body-shaming isn't OK, and it's an important message that holds true regardless of a woman's size or shape.

33-year-old fitness model Sarah Stage is certainly no stranger to Instagram pregnancy trolls: according to People, she first made headlines in 2015, when her barely-there baby belly with her first son, James, earned her major backlash. Stage is now six months pregnant with her second child, and once again it's almost impossible to tell — in a recent photo showing Stage posing in a bikini, her abs are still on full display. Stage's posts have led to users accusing her of everything from being unhealthy to literally faking her pregnancy, but Stage says her bump is just one example of how everyone looks different while pregnant, and she's urging anyone who doesn't agree to take their negativity elsewhere.

In the photo's caption, Stage wrote that she was looking for "positive vibes only," and it's no surprise why she felt the need to point that out. The pic itself garnered more than 79,000 likes, and lots of praise for her hard-earned figure, but also led to plenty of comments speculating over how it's possible that she could actually be 26 weeks along (with one troll even arguing that her baby, "[won't] survive without extensive medical care"). But even though it's really nobody's business, in an earlier post, Stage shared that her baby was healthy and measuring totally normally — and noted that, really, that shouldn't actually be a surprise, given that her similar-looking first pregnancy resulted in a healthy, almost-9-pound baby boy. She wrote,

I'm at a place in my life where happiness, peace and joy are my priority 👶🏻 Especially being #6monthspregnant, there's no room for any negativity so please take it elsewhere ✌🏼Baby #2 is healthy and measuring just fine 🙌🏼 I would think that after having James, who was born almost 9lbs and healthy, people would be more understanding during this pregnancy and keep their ignorant comments to themselves ... we are all different that's what makes us special and unique!

Of course, Stage isn't the first mom-to-be to come under fire for her size during pregnancy. In 2015, Australian fitness model Chontal Duncan's tiny baby bump led to a collective Internet freak out, despite the fact that she was both super athletic, and also 6 foot 1 inches tall with a long torso. Like Stage, Duncan also gave birth to a healthy baby boy despite the widespread criticism. Although, according to The Daily Mail, in October 2016, she revealed that she did end up requiring an emergency C-section, after doctors "struggled to rip Jeremiah from [her] tummy as [her] abs locked him in super tight."

That may not have been the outcome Duncan was hoping for, and to her critics it may have seem like justification for their mean comments. But the truth, of course, is that emergency C-sections are a necessary reality for lots of mothers, and are definitely not something that anyone should feel bad about. What's more though, is that by opening up about it — and risking further criticism by doing so — Duncan has served as a reminder that all birth experiences are valid and just as worthy of celebration as any other no matter what happens, and furthermore that anyone (even seemingly picture-perfect Instagram models) can have unexpected complications. And it looks like it certainly hasn't put Duncan off having another super-fit pregnancy: she's currently 30 weeks pregnant with her second child, and just as in shape as ever.

Social media seems to naturally be a hotbed of snark and criticism, but given that so much of motherhood is also full of extreme judgment, it must be particularly difficult for anyone with substantial followings who choose to open up about their pregnancies online. But fitness models with tiny bumps are only one target — both online and off, pregnant women seem to be a magnet for unfair unsolicited comments or advice about what they should or should not do with their bodies, and how they should or should not look.

Stories like Stage's and Duncan's though are reminders that no one can actually tell anything about anyone's pregnancies just by looking at them. And that, since the only people who actually have a right to be concerned about a pregnant woman's body in the first place are herself and her doctor, no one actually has the right to even try.