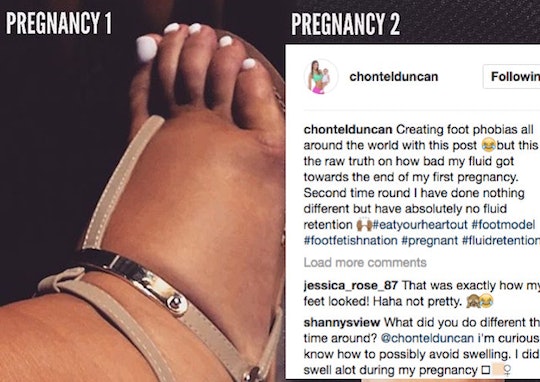 Australian fitness model Chontel Duncan catapulted into the spotlight back in 2015 when she shared a photo comparing her ultra-chiseled, first-time pregnant body with that of a friend. The purpose of these images was to raise awareness for the fact that every body carries pregnancy differently. Recently, toward the end of her second pregnancy, Duncan decided to whip out another comparison; except this time, the fitness model's side-by-side photos of her feet are proof that every pregnancy — even for the same woman — is different.

Moms of two or more children can probably relate to this sentiment. Having already been through the roller coaster of pregnancy, you go into your second experience thinking you've got it all figured out. And yet, this whole incubating-a-developing-human thing might still throw you a few curve balls. No morning sickness the first time around? Great! But don't be too shocked if you're hovering over the porcelain throne around the clock for baby number two. You wore regular clothes until the third trimester for your first pregnancy? Sorry to break it to you, but you might be whipping out those maternity clothes a lot sooner this time.

For Duncan, one of the huge differences between her first and second pregnancies was how her feet looked in the weeks leading up to delivery. "Creating foot phobias all around the world with this post but this is the raw truth on how bad my fluid got towards the end of my first pregnancy," she wrote last week on Instagram. "Second time round I have done nothing different but have absolutely no fluid retention."

Seriously! Can you even believe that's the same person? It seems this mama is the queen of witnessing the extremes of pregnancy.

If you're having a difficult time remembering, November 2015 is the first time Duncan emerged into the realm of parenting news. She shared a belly-to-belly photo of herself and her friend, Nat, whose due date was only four weeks before hers. However, the drastic difference in how these two expecting moms were carrying their pregnancies was shocking. If you were like me, you're probably looking at this photo thinking, "NO WAY!" However, a few details about these two women helped explain the disparities:

Unfortunately, plenty of people criticized Duncan for not having a "proper" baby bump in the above photo. You know, despite the fact that she's super tall and looks like she has abs of steel. (Because obviously, little facts like that wouldn't affect how she outwardly carried her baby at all. Ugh.) Both mamas ended up delivering healthy baby boys, for the record. They even re-created the viral photo while holding their sons.

Even with her second pregnancy, Duncan was criticized for her ongoing fitness regimen and even accused of having pregorexia — an eating disorder during pregnancy. She gave birth to her second child, a son named Swayde Noel, on Sept. 20. And of course, she announced his arrival via Instagram: The healthy baby boy weighed in at 8 pounds, 7.5 ounces. Just look at that sweet face!

Having carried and birthed three children so far, I can totally relate to being caught off-guard by my different experiences. I remember having horrible rib pain with baby number one. So I was extremely relieved when that didn't happen with my two girls. (I'm guessing it may have had something to do with the fact that my son was so much longer than his sisters?) Also, my baby bumps progressively "popped" sooner with each pregnancy. I think if a fourth child was in the cards for me, I'd look pregnant before the urine even dried on the pee test.

The bottom line: As tempting as it may be, don't beat yourself up comparing your pregnancy to anyone else's, including your past pregnancies. Unless of course, you're sharing a jaw-dropping photo like Duncan's to spread awareness or for your own amusement. In that case, send 'em my way!