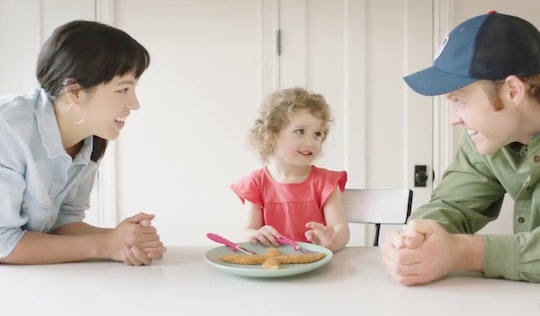 Even if you're not a super fan of the HGTV series Fixer Upper, you probably have an idea of what the show's about (helping homebuyers fix up old homes in desperate need of updates), and chances are you know who Chip and Joanna Gaines are. The charismatic husband-wife duo won over the hearts of millions through their quirky antics, creative home designs, and impressive before-and-after transformations. Well, one couple decided to do their own take on the popular series — except it features their daughter, who is a super-picky eater. And honestly? This Fixer Upper parody video with a parenting twist is basically every mealtime with a toddler.

As HuffPost reported, a video titled "Fix Her Supper" was shared by The Dad — a media and entertainment brand that targets millennial dads — about a week ago. Within this short time frame, however, the less-than-4-minute video has managed to rack up a whopping 1.8 million views. And it isn't difficult to see why. The video begins with a couple named "Mom" and "Dad," who have an uncanny resemblance to Chip and Joanna Gaines, as PopSugar reported. "Our daughter's got reservations, but if I know Mom, she's going to throw on those front-burners and really blow her socks off," Dad declares in the cheesiest way possible.

"That was weird," Moms says to someone off-camera.

"Use that for the opening. That was good!" Dad re-assures the production team.

From there, the challenge at hand is revealed to viewers. "We're Mom and Dad. We take the pickiest eater and do the best we can to try and make our child's dream meal. Do you have the guts to fix her supper?"

The three houses, err choices on the menu, are chicken fingers, macaroni and cheese, and cereal. Which are typical little-kid classics, as caregivers know all too well. The client (aka, their daughter) ultimately goes with the chicken fingers. What could go wrong, right? However, just like the original Fixer Upper, Mom and Dad hit some road blocks along the way. Like discovering they're out of their daughter's favorite dipping sauce. *Gasp*

"Hey Houston. We've got a problem," Dad says after taking one look in the refrigerator.

Mom comes over to investigate, and she soon realizes, "No ketchup."

"You want to make the call?" Dad suggests.

"Hey sweetie," Moms says into the phone after calling the client. "So we looked in the fridge and we noticed something: We're out of ketchup."

"It's OK," the little girl replies over the phone, after a long pause.

"Okay great! We'll move forward without the ketchup and I think you're really going to love it."

After the chicken has been baked, Dad provides a re-cap of what it took to get to this point. "All in, time was probably about 15 minutes between pre-heat and cool-down, with an all-in cost of $7.53," Dad explains to his daughter. "And in our opinion, we think you made a great choice."

Guys, they even had a life-sized cardboard cut-out reveal of the finished product. Nailed it.

"So, what do you think?" Dad asks, after the client takes her first bite.

"It's OK," their daughter answers, with no emotion.

"That's a victory in my book," Dad adds, before again assaulting Mom with the chicken fingers attached to his actual fingers.

Personally, I found this clever parody to be spot-on, in both being true to the original while also depicting the struggle that is feeding small humans with ever-changing palates. I mean seriously, the hair and wardrobe were perfect for Chip and Joanna Gaines. Not to mention, Dad's weird chicken finger antics and over-the-top corniness captured Chip's essence perfectly. And so many parents can relate to how impossible it seems to cook a meal their toddler will actually eat, even if their little ones pick the food out for themselves. If you're currently in this situation, TODAY has some tips that will help save your sanity.

As far as picky-eaters aspect is concerned, I feel this so hard right now, guys. My 2-year-old has hit a phase where meals she's loved in the past (like last week) are shunned the next time we serve them. It's endlessly frustrating. And sometimes, it feels like the only thing she'll actually eat is mac and cheese. Thanks to my two older kids, though, I realize this is likely just a phase — and all we can really do is just wait it out. In the meantime, here's to feeding my garbage disposal a healthy diet of uneaten fruits, veggies, and meat, courtesy of my toddler.