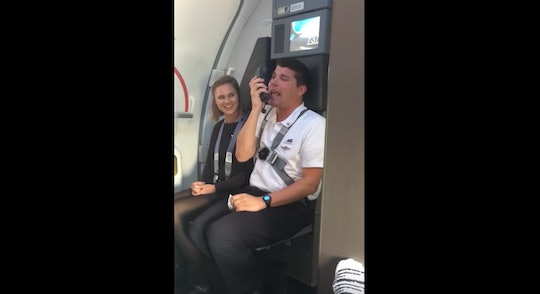 This Flight Attendant's Looney Toon Announcement Will Give You Major Nostalgia

Sometimes flying in an airplane can seem incredibly boring or mundane. Between a lack of space between seats and the unpredictable inflight wifi, most of the time while I'm traveling, I spend the majority of the flight wishing it was over. Thankfully, there are some unsung heroes in the travel industry willing to make flights a little more interesting. Like this flight attendant's Looney Toon announcement, which is so entertaining.

The video, which was captured by a traveler on the flight, shows a simple scene in its two minutes — a flight attendant giving a speech, just like those given on any other flight. But this one is unique, as it is done in the style of the Looney Toons characters, using their voices and catch phrases to deliver one very memorable speech. "Be vewy, vewy quiet, we have reached your destination," the flight attendant, Zach Haumesser says in the beginning of the speech — in the style of character Elmer Fudd. But Haumesser continues, making it even more clear what he is about to do for those who don't get the initial Looney Toons reference. "Bugs Bunny here and I'm here for this flight crew with Southwest Airlines. Welcome to Chicago," Haumesser (as Bugs) says into the flight's PA system.

The result of this speech is some serious nostalgia for the times I watched classic cartoons every morning before school. Not to mention the '90s nostalgia of Space Jam — the movie where the Looney Tunes characters teamed up with basketball player Michael Jordan to show off their serious basketball skills.

Of course, Haumesser receives raucous applause from the passengers at the end of his speech — which is well earned. His uncanny ability to sound exactly like the different Looney Tunes characters not to mention his ease of switching in and out of voices is an award winning performance. It appears that everyone else thinks so too — in the two days since the video was uploaded on Youtube, it has received over 1 million views and over 24,000 likes by viewers who were pleased with the performance.

But Haumesser's Looney Toons inspired flight announcement is up there with those videos— using the nostalgia factor of classic cartoons and his incredible talent of replicating voices to deliver one of the best inflight speeches of 2016.