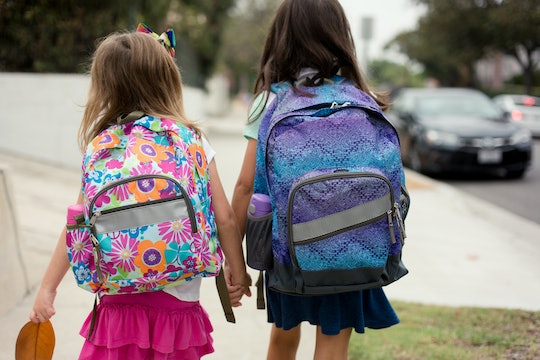 If you were concerned about the lack of riot gear on your child's school supply list this year, you may want to think about changing districts. because a school in Florida is selling bulletproof backpack panels to their students, to give them that all-important tactical edge. Nestled just beneath the transcript request and school logo t-shirt order forms on Florida Christian School's website is an order form for a $120 "ballistic panel," CNN reported. This makes it seem that either the school doesn't want to foot the bill for students' safety, or it knows that the panels are wholly unnecessary, but doesn't mind making a few bucks off of scared parents. So which is it? Florida Christian School did not immediately return Romper's request for comment.

George Gulla, the school's head of security, told the Miami Herald that he would "rather be prepared for the worst than be stuck after saying 'Wow, I wish we would've done that.'" During the school's armed assailant drills, students are taught to wear their backpacks on their chests as shields. Parent Alex Cejas, who runs a local body armor company, witnessed one such drill, and approached Gulla with an offer to provide other parents with the opportunity to purchase the inserts through his company. "We thought, yeah, let's offer it to anyone who wants it," Gulla said. "It's not required. But if it gives you extra peace of mind..."

Are they only for peace of mind, or do they actually offer protection to students? "While books and stuff in your backpack may stop a bullet, they're not designed to," Cejas told the Herald. "I wouldn't bet my life on it." At just under a pound, the inserts, can take handle the force of a .44 Magnum or a .357 SIG without causing too much strain on young children's backs and shoulders. However, they're not designed to protect against rifles, because that would add too much weight to the product.

There's also the matter of logistics to think about. Kids don't typically have their backpacks on hand throughout the school day; what happens when they're at lunch, gym, recess, or even just on the opposite side of the classroom from their cubbies? After bulletproof school supplies started cropping up in the school year following the Sandy Hook massacre, NBC News spoke to several experts who characterized such devices as "impractical at best, and a diversion from real life-saving resources at worst."

Michael Dorn, executive director of Safe Havens International, said that time and resources would be better spent on training. "We know if you put kids in in double rows and practice a brisk walk with them, you can reduce the time of evacuate and shelter by 30 percent." Gregory Thomas, the former head of security for New York City schools, agreed that "feel-good" solutions aren't the answer. "You need to start with seeking out and identifying the kids that are likely to do these shootings before it happens," he told NBC.

School safety expert Ken Trump (no relation) wrote on the National School Safety and Security Services blog that bulletproof backpacks, armed teachers, and programs like Run-Hide-Fight training "prey on the emotions of anxious parents and educators." He believes that making kids responsible for their own safety in active shooter situations could potentially increase the risk of danger. "They are asking them to make some quite serious judgments that even trained adults are challenged to make. It is an unrealistic and highly risky expectation and burden to put on kids." Steve Brock, a professor of school psychology at California State University, Sacramento, told Education Week that parents and teachers shouldn't "unnecessarily frighten" students with hypotheticals. "When it comes to these kinds of activities, schools need to proceed cautiously." Telling kids that they need to carry bulletproof shields? Not so much.