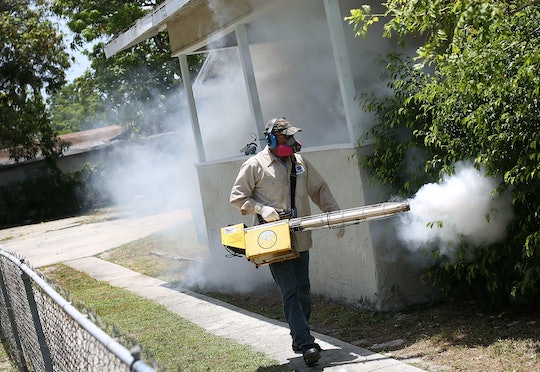 As the Zika virus finds its footing in Florida, officials are urging citizens and travelers to take precautions to stay safe. Since the initial outbreak in Brazil, Americans braced themselves for the virus to turn up in the United States. Though there aren't nearly as many cases in the U.S. as there are in South, the spread is still cause for concern. This Florida Zika map released by the Miami Herald illustrates the growing number of cases in the Sunshine State.

The Miami Herald updates its Florida Zika virus tracker daily, keeping a count of cases both originating locally and brought to the state by travelers. Animation shows how the number of diagnoses increased from Jan. 18, 2016 to the present. Most cases are concentrated in the southern part of the state, with particularly slow growth in the north. Though there are some instances of Zika virus tied to local spread, the majority are linked to out-of-state travel. The Miami Herald also offers a breakdown of total cases by county. Miami-Dade has the highest number: 143 travel-related cases and 33 locally-spread cases. Broward has the second-highest number, with 89 travel-related but only 1 resulting from local spread. Only one other county, Palm Beach, reported Zika virus contracted locally.

Though Floridians have no immediate reason to fear an epidemic, local officials are monitoring the situation to ensure the virus is controlled. As of Friday, Florida's only seen 35 Zika virus cases unrelated to travel, according to CNN. The Florida Department of Health reported the latest two this week, both in Miami-Dade County near Wynwood. The southeastern county is currently the site of most local spread.

The Centers for Disease Control and Prevention offered tips to minimize risk of catching Zika for anyone in and around Wynwood. The CDC advises pregnant women to avoid the area if at all possible. If an individual who lives there is pregnant, the CDC suggests taking measures to avoid mosquito bites and to use condoms during intercourse. Doctors are asked to monitor area pregnancies closely for signs of Zika infection, testing in both the first trimester and the second trimester regardless of whether the mother shows signs of exposure. Anyone planning to get pregnant in the area may want to consult with their doctor first, and travelers to Wynwood are advised to wait a minimum of eight weeks after leaving before trying to conceive.

Floridians and travelers concerned about the virus can find daily Zika updates on the Florida Department of Health website. In addition to the two Zika cases unrelated to travel, the department's August 18 update reported an additional 18 travel-related cases, the majority of which were identified in Miami-Dade County. Though anyone spending time in Florida may want to ward off mosquitos and take precautions to avoid sexual transmission, pregnant woman can be tested for the virus for free at any county health department in the state and get a personalized risk assessment. Zika's spread in Florida may be slow compared to its spread in parts of South America, but taking steps to avoid infection can help officials manage the outbreak.