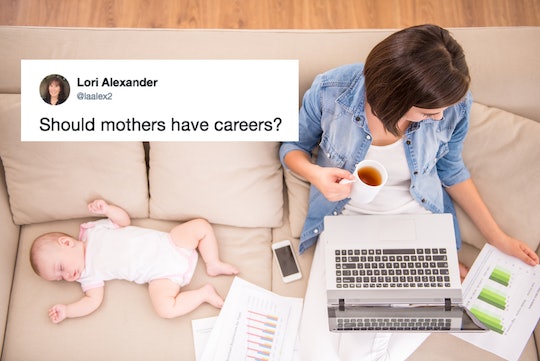 Although it's nearly 2019, working moms still face a ton of shame and criticism. And not that anyone asked for it, but one woman decided to make a flowchart asking whether moms should have careers — clearly suggesting the answer "no" — and then shared it on Twitter. Not too long after it was posted on Dec. 5, loads of people on Twitter quickly shut down these archaic stereotypes.

Earlier this week, Lori Alexander — who describes herself in her Twitter bio as "a wife, a mother, a grandma, and a keeper at home" and as someone who "is not afraid to speak Truth because it sets you free" — posted a photo of a handwritten flowchart with the caption, "Should mothers have careers?"

In the "home all day long" segment of the diagram, Alexander concludes that when a woman is a stay-at-home mom, "her life is fulfilling, her husband and children rise up + call her blessed," because she's able to do things like "rest while her children nap" and "dinner is from scratch."

Meanwhile, in the "away from home hours every day" side, she suggests that working moms feel that their lives are "falling apart" because she "comes home exhausted," doesn't cook from scratch every night, and is "too tired for intimacy [with her] husband."

Unsurprisingly, and understandably, many people on Twitter found issue with this logic, mostly because it unfairly suggests that moms aren't the multitasking and unstoppable wizards that they are.

As one person on Twitter wrote of her own mother, "My mom works full time and still comes home and cooks for my family. She's tired but it’s understandable, mothers are superheroes and for you to underestimate them like that is despicable. It’s a woman’s personal choice whether to work or stay at home."

One more shared, "My mom worked full time, raised three very well rounded and successful adults, is still married to my father, and would happily give you a fat lip for this bullsh*t you're spewing."

Plenty of stay-at-home moms also chimed in to find faults in Alexander's outdated and inaccurate reasoning. As one woman commented on the viral tweet, "I’m a stay at home mom who is exhausted all the time, doesn’t cook every meal from scratch, spends my weekends cleaning..."

Another SAHM commented that she can "assure you that I’m not intimate frequently with my husband because I’m exhausted and resentful that he gets his career." She added, "Perhaps the question should be are Mums be allowed to choose a career without fear of judgment and yes, yes they are!"

And for the record, SAHM hardly get a second to "rest" when the kids are napping, for example. In fact, a study found that "stay-at-home moms work the equivalent of 2.5 full-time jobs," according to Big Think.

Meanwhile, one single working mom, who said she became a firefighter after her husband left her and their kids, didn't hold back in her response, writing: "I have shown my kids that you choose to be proactive & help others, even if people aren't willing to help you... I'm a brilliant mum to my kids."

And finally, one woman nipped this this problematic chart in the bud and gave it an accurate edit. "I fixed it. Stop assuming things," she wrote alongside her Alexander's photo with a text overlay that read: "A mother should do what works for HER family."

Here's the moral of the story. We're living in 2018 and women can and should feel free to do whatever makes them happy and works best for their family. And though this "flowchart" seems to have been unearthed from some archive from the 1950s, the reality is that motherhood is constantly changing in America. In fact, according to a May 2018 report from Pew Research Center, mothers are the "primary breadwinners" in 4 in 10 families in the United States and about 1 in 4 four mothers are raising their kids on their own.

There's no "right" way to tackle parenting; what works for one family might not work for others. And as many on Twitter pointed out, moms are badass no matter what they choose to do.