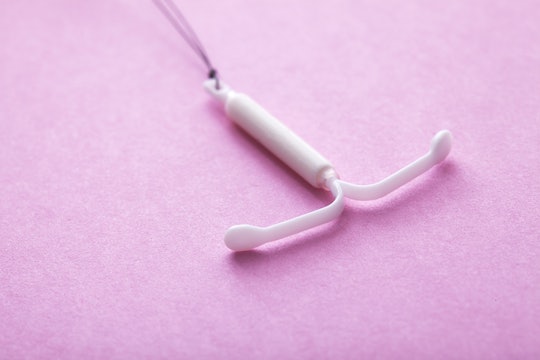 IUDs May Come With A Surprising & Protective Health Benefit, According To New Research

Contraceptives may exist first and foremost to prevent pregnancies, but that certainly doesn't mean that's all they're good for. In fact, IUDs — which are already considered a safe and widely effective form of long-acting contraception — may significantly lower a woman's risk of cervical cancer, too. That's according to a review paper published this week that analyzed 16 previous studies that together encompassed more than 12,000 women worldwide. And while the paper's authors warn that there's no preventive tool quite like screening and the ensuing follow-up care, this revelation has the potential to cut back on cervical cancer cases all the same.

The researchers from the Keck School of Medicine at the University of Southern California determined in the paper that women who used an IUD were a full one-third less likely than those who did not to be diagnosed with cervical cancer, according to Newsweek. And researchers have made other strides in reducing instances of this form of cancer, too. In 2006, the FDA approved the Gardasil vaccine that protects against forms of HPV, which is known to cause cervical cancer. Increased screening rates are also partly responsible for the 50 percent decline in cervical cancer diagnoses since 1975, Newsweek reported.

So, that's why Dr. Jasmine Just of Cancer Research UK, who was not involved in the study, believes that IUDs could be a particularly useful cervical cancer prevention tool in developing nations, as she told The Guardian:

The researchers who analyzed the data don't know for sure why IUDs cut down cancer risk so much. But lead researcher Victoria Cortessis told CBS News that one theory is that the device (which is inserted into a woman's uterus for up to 12 years, depending on the brand) may prompt a woman's immune system to fight off HPV. That's significant, Cortessis told the outlet, because HPV vaccines are generally effective only if administered before a girl or woman becomes sexually active. It's so widespread that many end up getting HPV soon after they start having sex.

Despite these promising findings, doctors aren't going to be actually recommending IUDs as a means to prevent cervical cancer to patients just yet, according to EurekAlert. Before that happens, researchers will dedicate themselves to figuring out why IUDs have the effect that they seem to. An additional possibility is that the secret could lie in the removal of the IUD, as that process could perhaps mean that precancerous changes and cervical cells that contain an HPV infection are scraped off, Cortessis explained, according to the website.

So, in the meantime, it's imperative that women make sure they get their screenings regularly. According to the American Cancer Society, Pap smears and HPV tests have been proven to detect pre-cancerous changes before they progress and turn into full-fledged cervical cancer. "If a pre-cancer is found it can be treated, stopping cervical cancer before it really starts," the society's website reads. "Most invasive cervical cancers are found in women who have not had regular Pap tests." Always using condoms and avoiding smoking can also prevent pre-cancers from forming, the ACS notes.

It's encouraging to see the robust research that professionals are conducting with the hope of protecting not only women in the United States and other developed counties, but those in the developing world, too. At this rate, it seems, there's a real possibility that cervical cancer could one day be a thing of the past.