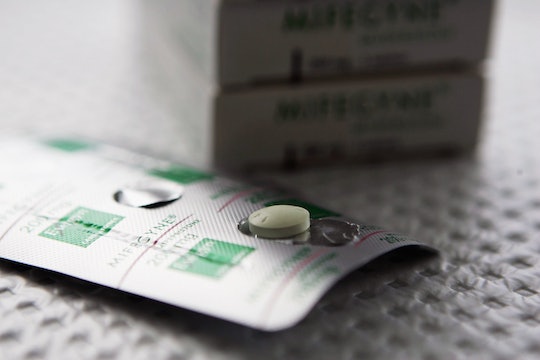 Starting Aug. 10, all women in Ontario, Canada, will be able to get their hands on an abortion pill entirely free of charge. This free abortion pill policy already exists in two other Canadian provinces (Alberta and New Brunswick, to be specific) and now, Quebec is hoping to join the party soon as well. There are, of course, a few groups who are opposed to the new policy — but it's a crucial step forward that helps everyone, boosting both women's rights and a country's economic development.

Once the free abortion pill policy goes into place in Ontario, the province will begin covering Mifegymiso, a medical alternative to surgical abortion that can be taken up to 49 days from the first day of your last period, for all women with a valid health card and a prescription from a doctor or nurse practitioner. The move is an attempt to completely remove what is often a significant barrier to abortion — i.e. financial constraints — and make it accessible to women of all socioeconomic levels.

As with all issues that concern abortion, some people are decidedly unhappy about the province-wide move. "There are competing needs under the health-care system and that it saddens us greatly that they are going to be funding another form of abortion as opposed to genuine health care," Johanne Brownrigg, a lobbyist for the Campaign Life Coalition, told the CBC recently.

But the thing is, whether an individual personally leans pro-choice or anti-abortion doesn't matter. The numbers are clear: making abortion accessible benefits society at large. When women have access to family planning, their children benefit: not only are their kids are more likely to finish university, but their incomes increase by 20 to 30 percent over their lifetimes, according to a 2013 report published by the National Bureau of Economic Research.

Funding abortion also helps the government avoid the much higher costs that come with unintended pregnancies. Pharmacists will bill Ontario for CAD $337.25 (around USD $266.63) each time a woman obtains Mifegymiso, which at first glance seems like a good chunk of taxpayer money. However, publicly funded insurance programs pay for nearly 70 percent of unplanned births in the United States, and the cost of a live birth alone can range from from $9,131 (for a vaginal birth) to $13,590 (for a caesarean), according to Medscape. Suddenly, shelling out $266 doesn't seem so bad.

Giving women free access to abortion pills also means that low-income women can obtain abortions more quickly, rather than waiting until they can afford it, which can mean a later stage, riskier, and more expensive abortion. Making sure all women have equal access to abortion means giving them a better chance at better health, more economic stability, and a higher chance of achieving career and educational goals.

Once you look at the numbers, it's hard to see why any provinces or states would choose not to publicly fund access to abortion pills. Giving women more power when it comes to family planning benefits everyone, and it's a critical next step in advancing women's rights.