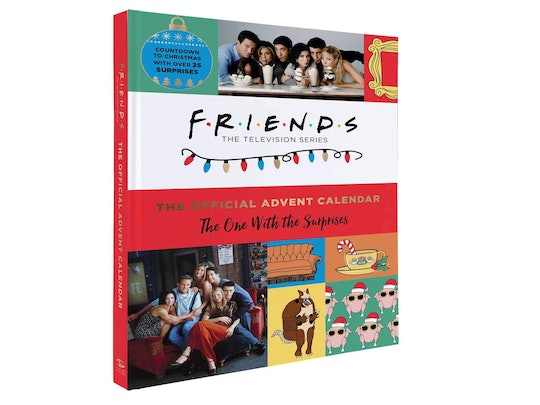 Well folks, put on all of your clothes and get your head inside a turkey, because it's almost that time of year again. If you're ready to pivot away from all the hot mess of these past several months, this Friends Advent Calendar may be the perfect way to get yourself in the holiday spirit.

Available now for pre-order, the calendar will be sent to you just before Halloween, which in my opinion is the perfect time to start preparing for all things Christmas. The calendar is only about $18, and for that you get 40 keepsakes and booklets in this 25-day set. Will there be a tiny recliner ornament or a Central Perk mug bookmark? The fun is in finding out. Personally, I'm hoping for a tiny, mustachioed Tom Selleck (Dr. Richard Burke) alongside a neat pair of glasses so that he can look upon Monica and Chandler's wedded bliss with desperate envy — I mean, he kind of deserves it, right?

HBO Max just released the series on their platform, so interest in the series is once again on the upswing. That makes it the perfect time to release this Friends Advent Calendar filled with buttons, recipe cards, and trinkets that fans of the series will obviously love. Being that it's at such an affordable price point, it will likely sell out sooner rather than later, so I would preorder it now if you're hoping to get your hands on one. (God, I hope there's a recipe for Rachel's trifle.)

I have no doubt that with the rerelease, more and more Friends merch will be available, but the element of surprise in this one is just so much fun that you can't pass it up. Yes, it will be silly and a little bit cheesy, but honestly, so was the whole show. I mean, just think of Phoebe's songs or Joey's — well, Joey's anything, really. It's actually kind of pitch perfect.