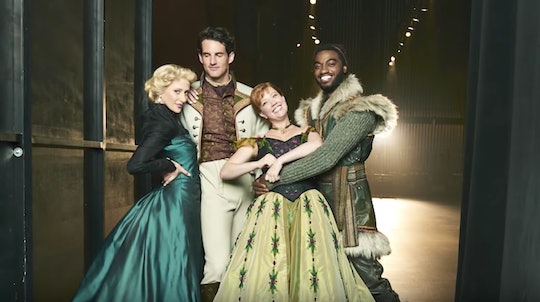 This 'Frozen' Musical Preview Will Have You Shivering In Excitement

It has been three years since Frozen entered the homes and hearts of families and forever put "Let It Go" on repeat in every minivan, everywhere. When the movie debuted in 2013, Frozen fever took over. With the movie's catchy songs, bad ass female lead, and adorable sidekicks, it truly was a recipe for success. Disney is hoping to strike that success again so many years later with a musical based on the hit movie. Fans will be so excited after watching this Frozen musical preview, that restores the love of the film and brings the characters to life.

OK, so the preview is only 48 seconds long (and doesn't reveal too much) about the production, but it is still incredibly exciting nonetheless. For the first time ever, Disney on Broadway released a photo and short video of the core Broadway cast — in their beautiful costumes bringing Ana and Elsa to life. The animated characters have never felt (or looked) so real. This is the first preview of the show's actors in full costume (a previous preview showed the actors in early rehearsals but was still so exciting).

This video brings fans one step closer to imagining the stage production of the record breaking film and will make any die hard Frozen fan's heart skip a beat seeing Elsa (played by Caissie Levy) and Ana's (played by Patti Murrin) coronation dresses come together for the first time.

This preview brings fans just one step closer to witnessing the musical up close and personal, but it won't be that easy to do so. Before the musical can hit Broadway in New York City, it will begin previews in Denver, Colorado until Oct. 1, where the show will be perfected and hammered out before debuting on Broadway in February 2018.

Even though the animated film is cherished by so many, the musical's director, Michael Grandage told Entertainment Weekly that the stage will lend itself as an exciting element for the musical, which will definitely change things up a bit, but in a good way:

The interesting about a movie is that it's going to be exactly the same tomorrow night, whereas a staged piece is absolutely not and that's our greatest asset. I'm not particularly interested in slavishly replicating a movie on stage, because it won't challenge anybody. We've got so many assets at our disposal we can take that whole experience further. We can present things in new ways. We've got a bigger narrative arc. We've got more songs than the movie, and an opportunity to develop story lines but in greater depth.

But there is absolutely no way that this musical can be bad. With the same amazing songs from the movie and larger than life costumes, the Frozen musical sounds like it is going to be amazing. This preview confirms that.