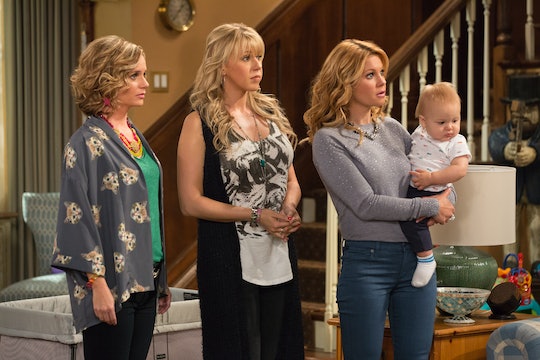 The Full House Netflix reboot, dubbed Fuller House, was wildly successful in spite of mixed critical reviews. A subtle, nuanced, tight half-hour comedy it is not; but a clever sitcom brimming with nostalgia and maybe a side of cheese is what fans signed up for, and it's what they got. The show follows the "new" Tanner clan, comprised of mom D.J., Aunt Stephanie, and Aunt Kimmy, plus various and sundry children. Need a quick refresher of the new family dynamics? Never fear: this Fuller House Season 1 recap will fill you in on where we left off.

The adults fans of the original remember — Danny, Joey, Uncle Jesse, and Aunt Becky — are still around, but they serve more as guest stars making occasional cameos. The show focuses on the younger generation of Tanners, who move into the old house and care for their own children there. It's a clever gender swap of the original premise, giving us a house of moms, aunts, and sons, instead of dads, uncles, and daughters. While the Tanners do have some musical family members — lookin' at you, Jesse and The Rippers — one highlight of the reboot was a ton of surprisingly talented dance numbers. Jodie Sweetin, who plays Stephanie, was fresh off a stint on Dancing with the Stars when Fuller House Season 1 was in production, and the show gave her plenty of opportunities to show off her technique. But here's what else you missed.