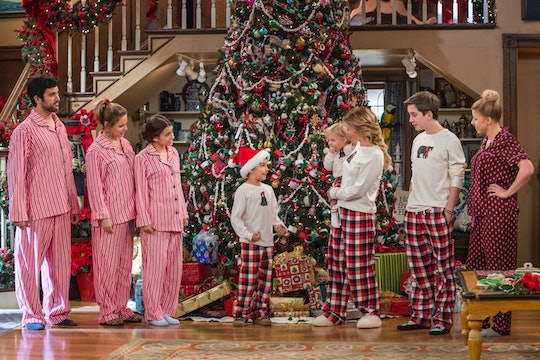 Gather round, Fuller House fans — for it's a Christmas miracle: Fuller House has officially been picked up for a third season of scripted laugh-track hilarity! Netflix, you're the freakin' best. Even better is the adorable Fuller House season 3 renewal video that the show posted to their Twitter account on Christmas Eve. "Holiday wishes, answered," began the tweet and then confirmed that Fuller House season 3 is coming to Netflix in 2017. No word from Netflix yet on just when in 2017 fans can expect to reunite with the Tanner Fuller families — but this sweet Christmas-y announcement video is still pretty exciting all the same.

Season 2 of Fuller House brought much more of the single-camera sitcom antics fans have come to expect from the series. Season 1 had no problems poking fun at itself, while season 2 embraced its nostalgic hokeyness fully, tackling a number of different plots at once (warning, spoilers ahead): There were marriage proposals, cases of mistaken identity, kids' hair-brained schemes that inevitably went wrong, and plenty of kisses backed by the "audience" ooooOOOOhhh!-ing all over the place. Oh, and babies. More baby stuff this season. There were obligatory Halloween, Thanksgiving, and Christmas episodes as well, and an amazing guest cameo by New Kids on the Block.

Backed by the freshly updated Fuller House theme song, Candace Cameron-Bure as D.J. Tanner Fuller passes a beautifully wrapped present to fellow cast members of the show. When it finally reaches Jodie Sweetin as Stephanie Tanner, she lifts up the bottom of the box to reveal the good news: Season 3 of Fuller House is coming!

Presumably, Bure will have a much more open schedule to devote to filming the newest season of Fuller House next year: In Earlier this month, Bure announced she was leaving The View, after just two seasons one of the five co-hosts on ABC's iconic and long-running daytime talk show. Bure cited both her commitments with Fuller House and The Hallmark Channel as the reasons for her departure; The View is filmed in New York, while Bure, 40, lives in Los Angeles with her husband and three children. Fuller House is also filmed in California:

Honestly, it’s the travel. I have traveled coast to coast every single week so I could be at home on the weekends with my family, and then back to work in New York during the week.

With no official season 3 premiere date yet announced for next year, there's plenty of time to either catch up on or rewatch both seasons of Fuller House on Netflix.