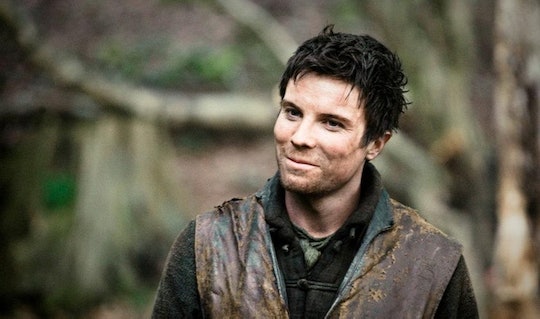 Though Gendry hasn't made an appearance on Game of Thrones since Season 3, he's still missed by the audience — particularly because he just seemed to disappear into the mist with little explanation. After charmingly escorting Arya around Westeros for a while and then getting creeped on by Melisandre thanks to his king's blood, Gendry vanished. Gendry going missing while rowing off into the sea became a running joke on the series, but now it looks like the mystery of where he went might finally be solved. This Gendry theory will get Game of Thrones fans even more excited for his return.

Though Gendry probably isn't still rowing around in the waters between Dragonstone and Dorne, that was his last known location. And there is another character who has found himself in the same location. There's a chance that Gendry will cross paths with Theon while out on the high seas, and Theon will serve as his re-introduction to Westeros. The timing would have been perfect after Theon jumped ship during the battle against Euron, when he was just floating in the ocean like a piece of driftwood. Sadly, Gendry was too late to come to the rescue right then (that honor went to some less murderous Greyjoys) but it's still possible that they might run into each other out there.

If they do, Gendry could escort Theon back to Dragonstone and then end up back in the thick of the action. It would be a lot safer for him to return now that Stannis is dead and Melisandre is less inclined to undertake a human sacrifice at the drop of a hat. It could even result in Gendry getting a job: dragonglass needs to be mined to create weapons to fight the White Walkers, and who better to create those weapons than everyone's favorite blacksmith?

It's practically a guarantee that Gendry will be returning; the only question is how exactly he'll find his way back. The show may have missed the chance to have Gendry fish Theon out of the ocean, but Theon could still serve as Gendry's point of entry back into the story. There's also potential for them to be an interesting combination of characters; Game of Thrones usually does well when it throws unexpected characters together, and both Theon and Gendry could benefit from joining forces for a time.

But even if Theon doesn't become Gendry's rowing buddy, it's only a matter of time until Gendry is back on Westerosi shores again.