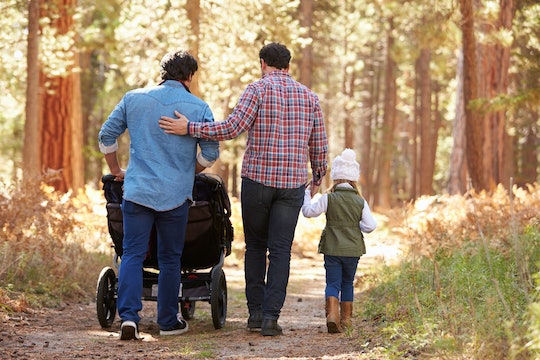 This Georgia Bill Could Block Adoption By Same-Sex Couples, & Here's How To Protest It

In yet another desperate bid by Republicans to stop the progress of the human race, a Georgia bill could block adoption by same-sex couples. Introduced by state Sen. William Ligon, Senate Bill 375, the Keep Faith in Adoption and Foster Care Act, has already passed the Georgia Senate Judiciary Committee and will go to the state senate for a vote, according to WSB-TV News. The bill would allow private adoption and foster care agencies that receive taxpayer dollars to "practice religious freedom" by refusing to allow same-sex couples to adopt through their agencies, which critics say amounts to legally protected discrimination. Bizarrely, Ligon claims that the measure would allow "more opportunities for adoption," not less.

The bill's text doesn't specifically mention LGBTQ parents, instead stating that it would "allow a child-placing agency to decline to accept a referral from the department and decline to perform services ... based on the child-placing agency's sincerely held religious beliefs." It would also prevent the state from "discriminating against" such agencies. Agencies would still be required to comply with the Americans with Disabilities Act and Title VI of the Civil Rights Act of 1964, meaning they couldn't discriminate based on race or disability, so many say it's clear which "beliefs" the bill is meant to support.

In addition to refusing to place kids with parents they disapprove of, advocates say the agencies would also be free to discriminate against LGBTQ children, denying them the loving, supportive families that they so desperately need. Democratic State Sen. Elena Parent told the The Atlanta Journal-Constitution:

There are LGBT kids who are in the system, and they're more likely to be in the system than kids who don't identify as lesbian or gay, so I think there's a real question about whether they could be harmed.

Of the 1.6 million homeless youth in America, an estimated 40 percent are LGBTQ, according to the True Colors Fund, approximately 10 times the amount of the general population (according to Pew Research, about 4.1 percent of Americans identify as LGBTQ).

Ligon defended the bill in the senate, claiming that "States have failed our faith-based agencies." He says other states had forced these agencies to "choose between violating the tenets of their faith or going out of business," the Journal-Constitution reported, but when pressed by Sen. Parent, he admitted that Georgia law currently has no protections for LGBTQ couples, meaning that the bill is completely unnecessary. It could also be extremely harmful to the state's economy; the Associated Press estimates that North Carolina's "bathroom bill" cost the state more than $3.76 billion in lost business.

Hundreds of studies have show that children raised by same-sex couples are emotionally, socially, and educationally on par with their peers who were raised by opposite sex parents, according to the Guardian. Additionally, the act could be used to discriminate against single parents looking to adopt — a choice that's becoming increasingly common — since the "sincerely held religious beliefs" in the bill's text aren't defined. The U.S. Department of Health & Human Services has reported that adopted children raised by single parents "experience outcomes that are as good as, if not better than, those for children adopted by couples."

Same-sex couples are four times more likely to raise adopted children, and six times more likely to raise foster children, according to Georgia Unites, meaning SB 375 could severely limit the availability of homes for kids. If you're in Georgia, you can use the state's site to identify and email your state senator and urge them to reject the bill. If you'd like to do more, Georgia Equality is hosting LGBT Lobby Day on March 1 at Atlanta City Hall. Breakfast will be served, and attendees will receive training on how to speak to state legislators before heading across the street to the Capitol to meet with them. Simply put, this bill hurts families, and it can't be allowed to pass.