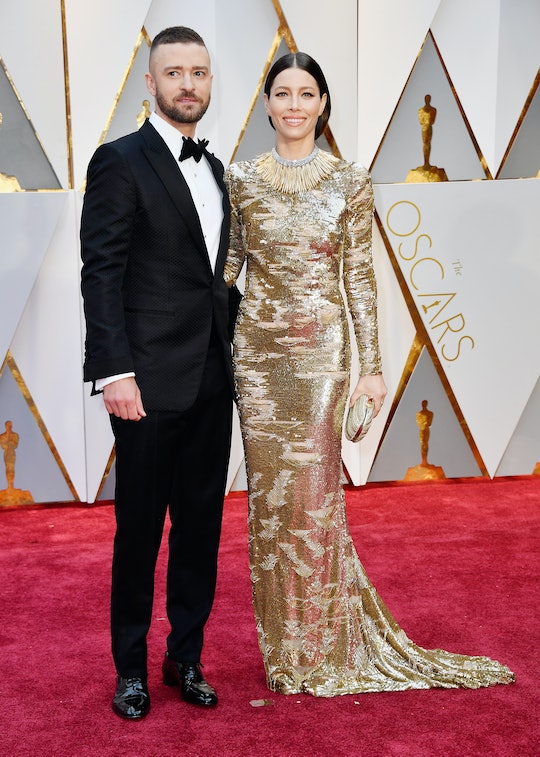 This Oscars Gif Of Justin & Jessica Is Hilarious

When Justin Timberlake and Jessica Biel walked the red carpet at the Academy Awards, Timberlake made sure all eyes were on his wife. Though they were attending the ceremony because Timberlake was nominated for Best Original Song for "Can't Stop The Feeling!" from Trolls, he was all about Biel on the red carpet. In case you missed the attention-grabbing moment, this gif of Jessica Biel and Justin Timberlake on the 2017 Oscars red carpet has forever captured it. While she stood posing for pictures in front of the wall of photographs, Timberlake snuck up behind her. In a memorable photobombing moment, he danced behind her while she remained stoically statuesque.

In addition to being hilarious (and producing some amazing red carpet pictures), the moment between Biel and Timberlake was seriously adorable. It was a playful moment for the couple that made it seem like they definitely have a lot of fun together. It was also pretty fitting moment considering the song Timberlake is nominated for: a happy song that's easy to dance to and was written for an animated movie about troll dolls. It's a lighthearted song, and Timberlake keeping it lighthearted on the red carpet was perfectly on theme.

It was also incredibly easy to turn into a meme. Timberlake sneaking behind Biel to peer over her shoulder while she posed for pictures unaware could lend itself to all kinds of captions. It perfectly captures the feelings of slinking away from answering a question you're not quite ready to face. Like, say, if you're being asked about an N*SYNC reunion that would obviously be the thing dreams are made of — as Twitter user Michael Blackmon aptly joked.

Timberlake was also effusive about Biel's red carpet look, which was a formfitting, textured golden gown with a statement necklace that made her look a little bit like an Oscar herself. When she was asked who the designer was, Timberlake piped up and said, "I call it perfection, baby!" Not only was he keeping all eyes on her with his showy photobombing, but he was making sure to keep the compliments coming during interviews, too. Though Timberlake was grabbing the spotlight, he was making sure it stayed on Biel just as much.

Best of all, the moment between Timberlake and Biel was a glimpse of genuine fun in a very formal situation that undercut the sometimes-serious event in a great way.