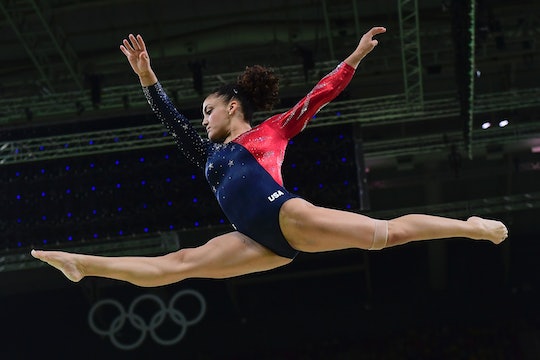 USA Olympic gymnast Laurie Hernandez dropped the mic during her floor routine in the Women's Gymnastics Team Finals on Tuesday. She knew that she was going to bring it, and this GIF of Laurie Hernandez's floor routine during the finals shows just how hard she went, and just how much fun she had while doing it. Hernandez is one of the fan favorites this year because of her awesome presence when she's competing. Yes, she's a bad*ss athlete, but she also seems like a person that anyone and everyone would want to befriend.

Hernandez is the first Hispanic U.S.-born athlete to make the U.S. women's gymnastics Olympic team since 1984, according to NBC News. She's also only 16, making her the youngest Olympian on the gymnastics team. But that doesn't mean that she competes on a different or lower level than the rest of her teammates. So far, Hernandez has taken a first place in the women's team all-around and a second place in the women's beam, according to Google Olympics results.

When Hernandez started her floor routine on Tuesday, she got into a fierce leg-out, hand-behind-the-head position. It looked like she was striking an exaggerated pose for a camera. Then, she winked at the judges.

It was a brilliant moment. If I had been judging the competition, I would've immediately given her the highest score while also letting out a ridiculous giggle. (But I guess that's why I'm not an Olympics gymnastics judge, in addition to the fact that I can't even do a cartwheel.)

Hernandez's faces and personality during routines is a known and acknowledged asset in the gymnastics world. International Gymnast Magazine called her the "human emoji," according to NBC News, because her faces and personality are just that expressive. And, in her floor routine, she definitely lived up to that name.