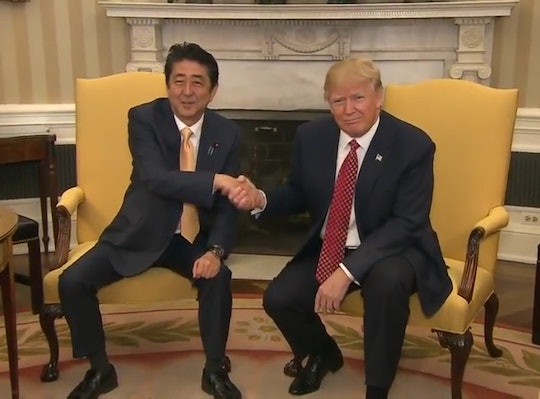 Two world leaders met on Friday and talked about who knows what, because everybody was too busy discussing Japanese Prime Minister Shinzo Abe and President Donald Trump's weird handshake to ask them. This GIF of the Japanese prime minister shaking Trump’s hand gives you some idea of just how awkward it was, but the handshake went on nearly twice as long. CNN clocked it at a full 19 seconds, and watching the full video of the handshake with sound gives some insight into what was going on.

Obviously, the handshake was a photo op, so it's bound to look a little contrived, because it was. After Trump sat down and practiced different facial expressions for a while, Abe, the more experienced of the pair, suggested that they shake hands. Trump just did this routine with President Obama three months ago, but apparently he needed a little coaching. After alternatively yanking and patting Abe's hand, Trump asked him what the Japanese photographers were saying. "'Please, look at me,'" Abe told him, but Trump didn't realize that he was translating their words directly; he began to stare at Abe. Abe attempted to redirect him by pointing toward the cameras and told Trump, "Look," but Trump didn't seem to get it.

It appears that Abe eventually gave up and decided to roll with it, smiling back at Trump for a few more painfully awkward seconds. Finally, a voice off camera called out, "Alright, thank you, press!" signaling the end of the handshake, and Trump gave the confident double thumbs-up of someone who's sure they've nailed it. Abe, meanwhile, eased back into his chair with the most pronounced "Yikes" face since Jim Halpert on The Office. "Strong hands," Trump said to Abe, then appeared to mime swinging a golf club, or perhaps flipping an extraordinarily heavy grilled cheese sandwich. Abe laughed politely.

Trump has a history of awkward, weird, and cringe-inducing handshakes, such as when he bro-hugged Kanye West at Trump Tower, and when he jerked Judge Neil Gorsuch's arm so hard, he pulled him off-balance. In fact, that wasn't even his first strange handshake with Abe that day; when Abe arrived at the White House, Trump greeted him as he emerged from his car, hugged him, clasped both of Abe's hands, then hugged him again. He also recently pulled the arm-jerking move on Secretary of State Rex Tillerson, who then jerked back, and the the two played tug of war until it looked like they were sawing an imaginary log together. His method with Vice President Mike Pence varies; sometimes he jerks his arm, sometimes he tries to kiss him. Can't wait to see him try one of those moves on the dwindling number of New England Patriots planning to visit him.