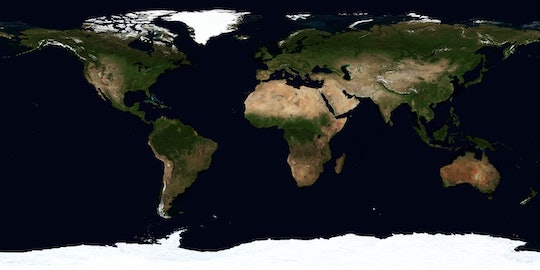 On Thursday, President Donald Trump fulfilled his campaign promise to withdraw the United States from a massive pact with almost every other country in the world to cut down on carbon emissions in a bid to halt global warming. Decried by other world leaders, environmentalists, and corporate giants alike, the decision to leave the 2015 Paris climate agreement is projected to severely undercut the nation's status in international negotiations on the subject as well as quite literally jeopardize the very earth. What's more, the United States turning its back on the agreement is likely to weaken other countries' commitments as well. And such an unraveling can — and likely will — be disastrous. To illustrate the point, this gif shows how four cities will be affected by Trump leaving the climate deal.

One of the signature diplomatic achievements of President Barack Obama's tenure, the Paris Agreement calls on each of its signees (196 countries — all but Nicaragua, which didn't think the agreement went far enough, and Syria, which, because of sanctions, wasn't even present at the initial summit to sign the agreement) to set their own goals to limit carbon emissions. Under Obama, the United States pledged to reduce its greenhouse gas emissions by between 26 and 28 percent from 2005 levels by 2025. It was an ambitious goal, but a worthy one: Meeting that ideal would mean that the United States would have been responsible for 21 percent of the total global reduction by 2030, according to Business Insider.

Now, with Trump's exit — which he says was imperative to protecting the nation's economic growth, according to The Washington Post — the work of protecting the planet is in peril.

Shortly after Trump was elected president back in November, vice president for sea level and climate impacts for the nonprofit Climate Central Benjamin Strauss shared a series of disturbing visuals of what the end of U.S. participation in the climate deal could mean. In an op-ed for The New York Times, he wrote that the way Trump and his administration choose to handle climate change "could redraw the planet's map" — and showed exactly how. The now-giffed maps (see above) of Norfolk, Virginia; Charleston, South Carolina; West Palm Beach, Florida; and Boston, Massachusetts employ three increasingly dire what-if situations for the year 2100, and the new trajectory Trump just laid out indicates that we're headed for the most disturbing projected outcome of all.

Strauss's maps deal with sea level rise, which is a worrisome aspect of climate warming. Let's take the example of West Palm Beach, Florida, because that's the home of Trump's beloved Mar-a-Lago estate. If sea levels rise two feet by 2100 — which is what Strauss says will happen if "there are aggressive cuts to greenhouse gas emissions beyond the pledges made in the Paris climate agreement" — water will creep onto the property.

A 3-foot rise in sea level by 2100 — the anticipated result of a continued increase in greenhouse gases and a slow rate of Arctic melting — would swamp Mar-a-Lago even more. Finally, the scenario that research now suggests is the most likely: a 6- to 7-foot increase in sea levels as the result of high greenhouse gas emissions and rapid Arctic melting. If that were to happen, Trump's heirs could pretty much totally say goodbye to Mar-a-Lago, because most of it would be underwater.

Clearly, sea level rise would put many of the country's coastal cities underwater. Climate change will also cause a more rapid spread of diseases like malaria, a reduction in the amount of freshwater available, an increase in both floods and droughts, and much more. As Strauss put it, opting to remain committed to the Paris climate accord and Trump's decision to leave it "is the difference between a difficult but manageable problem and worldwide catastrophe."