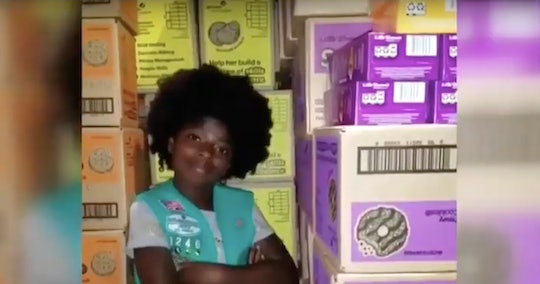 Girl Scout cookies are one of those products that just sell themselves. Everyone knows when those sweet, sweet cookies are in season, and most know where to get their hands on some. Despite all that, the girls themselves do some amazing — and adorable — marketing. In fact, this Girl Scout rapping Cardi B's "Money," is a perfect example of why people love to buy those cookies, and not just because Samoas are a gift from the culinary gods. Those little saleswomen in green uniforms are the perfect combination of entrepreneurship, innocence, and ingenuity. And I, for one, can't get enough.

A little Girl Scout from Los Angeles has gone viral for owning her #BlackGirlMagic in a video clip shared by the official Girl Scouts Twitter page. In the video, she remixed Cardi B's hit single "Money" as a means of convincing the public to buy even more of her delicious wares. As she explains in the video, her troop needs money, and only the real deal will do.

The tweet was posted to the Girl Scouts USA page on Sunday and has since gained a lot of attention. Thousands of people are talking about it on Twitter, many of whom have replied to the original post praising the girl for her creativity.

The little girl in the video is Kiki Paschall of Los Angeles, California and she spoke with local CBS News affiliate KCAL9 about how the famous video came to be. After recording the video with her friends and troop mates from San Fernando Valley’s Troop 3246, Paschall posted the video to her own social media accounts. After Girl Scouts USA picked up the video, it quickly went viral, gaining more than 40,000 likes on Facebook, according to KCAL9.

When asked how many tries it took to get the song just right, Paschall told the news outlet, “I’m not really sure how many times but I know it took an hour to do it." It was an hour well spent; she told CBS that since her video was posted, she has sold more than 1,000 boxes.

Paschall and her troop have ordered more boxes and hope to sell enough of them to fund a trip to the National Museum of African American History in D.C., as well as to serve meals at a homeless shelter and visit a senior center, according to NBC News affiliate WAFB.

Paschall begins her rap by mentioning her "black girl magic." For those unfamiliar with the phrase, Girl Scouts explained it in a separate as "a rallying cry to celebrate the strength, resiliency, and accomplishments of black women and girls who triumphantly succeed in a society where discrimination and inequality remains pervasive."

Similarly, HuffPost defines it as: "A term used to illustrate the universal awesomeness of black women. It’s about celebrating anything we deem particularly dope, inspiring, or mind-blowing about ourselves."

Twitter has certainly picked up on the magic. Most of the replies to the Girl Scouts USA tweet of Paschall's video were GIFs expressing just how catchy and jam-worthy her remix is.

As of now, Cardi B does not seem to be aware of Paschall's sick spin on her hit song. But if she does catch word of the black girl magic going on in L.A., it could go the way of the Girl Scout who remixed Childish Gambino's song "Red Bone." When Gambino met that little scout, he not only praised her ingenuity, but bought 113 boxes of cookies to help her reach her goal of 5,000 boxes sold, according to Lad Bible.

It's not clear just how many boxes Paschall and her troop have left to sell, but Cardi could be the key to meeting their goal. Magic, indeed.