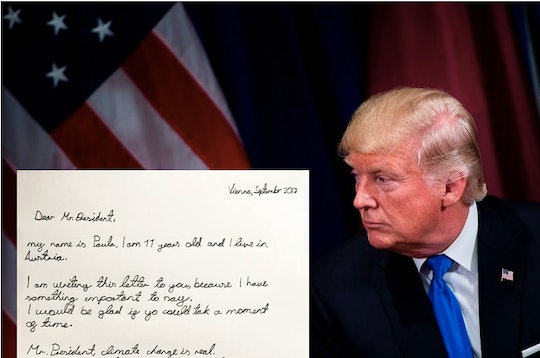 The Earth is warming up and the weather is changing. Say what you will, but this year has shown that global warming and climate change can't be stopped if world leaders and citizens keep ignoring it. It's frustrating to know that people — especially those with power to make actual change — refuse to believe science when so many people are asking them to listen, and that includes kids. Although President Donald Trump won't listen to it, this girl's letter to Trump telling him climate change is real could have the power to make him and other people want to listen.

The letter, written by an 11-year-old Austrian girl, was reportedly handed to Trump during the United Nations General Assembly last week — yes the same United Nations General Assembly where Trump taunted North Korea and called Kim Jung Un "rocket man." Instead of speaking to the world in a way that, according to CNN, "no American President" has ever done, maybe Trump could have paid attention to the letter gifted to him by Austrian President Alexander Van der Bellen, according to NDTV.

In a Facebook post, Van der Bellen shared the letter penned by the 11-year-old named Paula from Vienna that was directed towards Trump, informing him about climate change. In the letter, Paula wrote:

My name is Paula, I am 11 years old, and I live in Austria... I am writing this letter to you because I have something important to say. I would be glad if you could take a moment of time. Mr. President, climate change is real. People can see it all over the world. When our climate changes, we are all affected. You and me. People in the United States, in Austria, in China, Norway, in big cities and on small islands. You and other world leaders — please work together to find solutions to climate change. Now is the time to save our future. We only have one planet earth. Thank you for reading my letter, Mr. President.

Paula's words are so, so true. And the craziest thing is that she doesn't even live in the United States. It is amazing that a pre-teen in a different country on a different continent can see that there is a problem with climate change and can see that Trump's policies and platforms could pose as threat to this.

During the United Nations General Assembly, climate change was addressed. During his speech to the assembly, French president Emmanuel Macron doted on climate change and the Paris climate accord — something that Trump omitted from his speech, according to The New York Times. "The planet will not negotiate with us," Macron said. "However, we will continue with all governments, we will continue to implement the Paris agreement."

While Trump wasn't enthusiastic about climate change during the United Nations General Assembly, several politicians from the United States were. According to The New York Times, California Gov. Jerry Brown met with several world leaders and pledged to work with them to combat climate change, in spite of Trump's wishes.

In June, Trump announced that the United States was going to withdraw from the Paris agreement, or the agreement made by multiple countries to reduce global greenhouse emissions and stop global warming in its tracks, according to The Washington Post. Trump has remained a skeptic of global warming and climate change, calling it a concept "created by the Chinese" in 2012, as CNN reported.

The fact of the matter is, global climate change is incredibly real — regardless of what the president thinks. This August was the second warmest August on record, according to NASA, and the climate isn't going to get any better.

So maybe Trump needs to listen to this young girl. It wouldn't be the first time, if he did. Earlier in the month, Trump invited an 11-year-old boy to the White House after he wrote Trump asking if he could mow the White House lawn. While Paula's request is not nearly as exciting or easy to fulfill as landscaping, if the president is inspired to oblige by her words also, Trump's actions could change lives and even save the world.