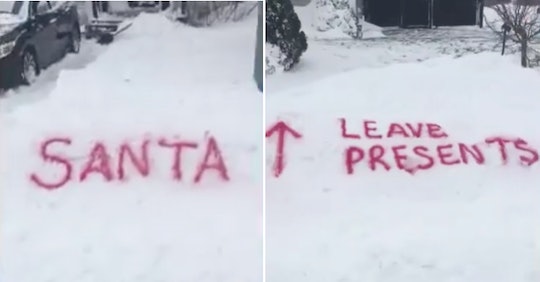 Kids take Christmas seriously, guys. Like really seriously. One perfect example of this is one 9-year-old girl's message to Santa about what do to with her presents and her brother. Kids do tend to be the most excited about what's under their Christmas tree, but this little girl took it one step further.

Yes, of course, parents can try to teach children the importance of love, generosity, and thankfulness, but really, who could blame them for wanting presents? And that seems to be the motivation behind 9-year-old Jennifer Murphy's unique message to Santa Claus this year. Canadian news station, CBC News, reported that Murphy decided to be a little bit more obvious with her message to the big man this year, as it's spray painted in giant, red letters in the snow outside her home.

"Santa stop here," Murphy's message begins, with an arrow pointing up to her house. "Leave presents, take brother!" she concluded. According to CBC News, Jennifer has an older brother, 13-year-old Ryan, who was apparently just a little too much for young Jennifer to handle at the moment.

CBC News also reported that Ryan and Jennifer's mom said the older brother wasn't too concerned with Jennifer's plea to Santa, as she "said he laughed off the good-natured joke." In addition to her initial plea to have Father Christmas take her brother and leave behind plenty of presents, Jennifer and her mom also wrote a message on the side of the house that reads, "Santa, I tried! Brother was worst..."

Seriously, you've kind of got to hand it to young Jennifer for trying out a new tactic this year to get as many presents as she possibly could. Obviously, since the message was written in what looks like spray paint, it's probably safe to assume that Jennifer's mom was there to help out, something a lot of Twitter users were quick to point out. Because, ya know, even a light-hearted story will still get judgmental responses.

But at the end of the day, are logistics really all that important? Jennifer's message to Santa is making people laugh and bringing joy to others. And her story isn't the only one to do so. A young girl in south Texas also wrote a letter to Santa that has since inspired hundreds all over the world.

Crystal Pachecho, 7, of Edinburg, Texas recently wrote a letter to Santa that broke her teacher's heart. While many children tend to ask Santa Claus for presents like a bike, a video game, or even money, young Crystal took the opportunity to ask for what she and her family really needed. Specifically, she only asked for "food, a blanket and a ball for her brothers to play with," according to CNN.

After Pachecho's teacher shared the letter to her Facebook, the principal of the school decided to start a blanket drive for all the kids at the school who are in need. Since then, the school has received over 900 blankets from around the world, according to CNN.

While Crystal's message to Santa is a little more heavy than Jennifer's, one thing remains clear: the holiday season truly is about family, love, and helping each other out. Whether that be hundreds of touched people sending blankets to Crystal's school to help out in whatever way they can or Jennifer's mom helping her daughter write a message to Santa and play a little prank on her brother all at the same time, it's an important message all the same.