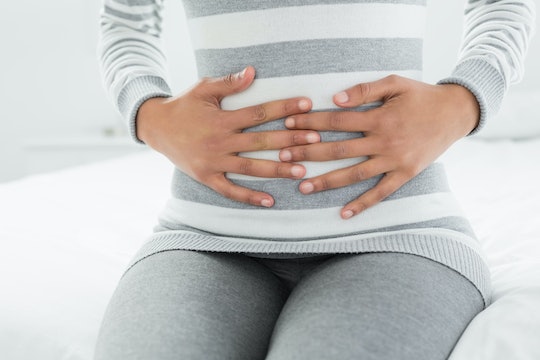 I didn't find out I was pregnant until the end of the first trimester. The pregnancy was unplanned, so I attributed my symptoms to polycystic ovary syndrome, which I have. But I learned I was wrong at 12 weeks into my pregnancy. Twelve weeks, by the way, seems to be double the amount of time Republican lawmakers think a person should have to decide if they want to continue with their pregnancy. Case-in-point: A new GOP abortion bill would ban abortion at six weeks — before, as is clear in my case, most women even know they're pregnant.

According to Teen Vogue, a judiciary committee will hold a hearing on November 1 to discuss H.R. 490, anti-choice legislation introduced in January by notorious abortion opponent Republican Rep. Steve King of Iowa. The proposed bill, entitled the "Heartbeat Protection Act of 2017," would ban abortions "in cases where a fetal heartbeat is detectable." It would also make it a federal crime if a health care provider knowingly performs an abortion procedure without first determining "whether the fetus has a detectable heartbeat," "without informing the mother of the results," or "after determining that a fetus has a detectable heartbeat." Teen Vogue reported.

H.R. 490 is the first so-called heartbeat bill to be introduced into Congress, according to Rewire, although it's certainly not the first of its kind. King's anti-abortion legislation is modeled after a similar extreme anti-choice bill that failed in Ohio last year. Ohio's "heartbeat bill" would have also made abortions illegal after six weeks of gestation, which many pro-choice advocates say amount to total abortion bans. Federal courts have declared such bills unconstitutional, Rewire reported.

What happened in Ohio does provide insight into what could happen at the federal level, though. According to the Cut, the same week Republican Gov. John Kasich vetoed the six-week abortion ban, he signed a 20-week abortion ban into law. How does that apply here? Earlier this month, the U.S. House passed its own 20-week abortion ban, titled the "Pain-Capable Unborn Child Protection Act," that uses junk science to promote debunked claims about fetal pain, Vox reported.

As seen in Ohio, and in other states such as Arkansas, six-week abortion bans have little to no chance of actually becoming law. But legislation prohibiting the procedure at 20 weeks of gestation are far more passable — despite still being unconstitutional and unnecessary. (Abortions after 20 weeks are highly uncommon; according to Planned Parenthood, 99 percent of abortions occur before 21 weeks.) That's why many abortion advocates view King's draconian H.R. 490 as a distraction from a more immediate threat to reproductive rights.

This is not to say that you shouldn't be outraged over H.R. 490. There is, of course, a sliver of a chance that King's bill will buck the trend of extremely restrictive — and wholly unconstitutional — abortion bans being shot down by more moderate lawmakers. But history has shown that six-week bans and similarly draconian legislation are smokescreens in order for the GOP to pass equally dangerous and life-threatening bills without much fanfare.

According to Vox, abortion activists believe the proposed 20-week ban is unlikely to pass the U.S. Senate. Still, it's far more palatable to more moderate conservative lawmakers (after all, several states have made such legislation law). That's why it's important to not let it fall under your radar.

So, while keeping your eye on H.R. 490, make sure you to protest "Pain-Capable Unborn Child Protection Act." And there are many ways you can help stop the proposed 20-week abortion ban from becoming a nationwide law. You can call your representatives or write them an email, talk to your peers and share accurate evidence on abortions, debunk junk fetal pain research any chance you get, join or organize an in-person protest, or start a social media campaign across multiple platforms.

More Like This
Spain Could Offer Up To 5 Days Of Menstrual Leave A Month & It'd Be A Game Changer
What Is Monkeypox & Should You Be Worried? Here’s What You Need To Know
Two Young Children Have Been Hospitalized Because Their Formula Is Out Of Stock
These 4 Sleeping Positions Will Keep You Comfortable After A C-Section