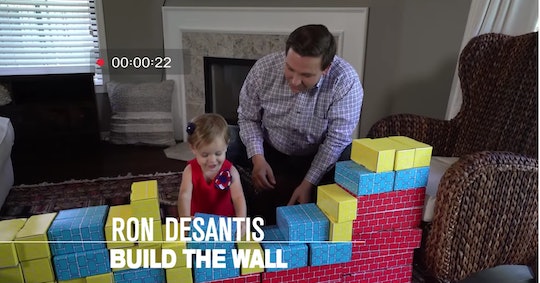 With state election season in full swing, it's likely that we'll be seeing more and more campaign ads in the upcoming months. But, one ad making rounds right now is truly disturbing to watch. In a new ad, Rep. Ron DeSantis, a GOP candidate, teaches his child how to build Trump's wall with colorful blocks. Romper's request for comment from DeSantis regarding the ad was not immediately returned.

The new 30-second ad by three-term congressman Rep. DeSantis was released on Monday, as Splinter News reported. It should be noted that Republican gubernatorial candidate in Florida was recently endorsed by President Donald Trump, according to the Orlando Sentinel. The campaign ad features his wife, Casey, who narrates for her husband, saying, that "everyone knows" about the Trump endorsement, however, DeSantis is "also an amazing dad."

And the scenes that follow are... concerning. In the ad, the gubernatorial candidate can be seen helping his daughter with cardboard blocks, while encouraging her, "Build the wall!" He even reads stories to his baby from Donald Trump's The Art of the Deal. "And Mr. Trump said, 'You're Fired!' I love that part," DeSantis says to his son in the ad.

In the next scene, the doting father is teaching his daughter how to read with the help of a Trump campaign sign. "Make America Great Again," he points to the words and says slowly to his little one.

"People say Ron's all Trump, but he is so much more," Casey concludes. "I just thought you should know." The camera then pans to a shot of the baby lying in a crib while wearing a "Make America Great Again" body suit. Meanwhile, DeSantis gazes lovingly at his child and says, "Big league. So good."

You can watch the full campaign ad below:

As The Cut reported, it seems as if DeSantis is hoping to appeal to Trump supporters, which will help him defeat his Republican opponents (Adam Putnam, especially) in the Aug. 28 primary election in Florida. According to recent polls, DeSantis is currently favored to win his primary with 41 percent of the vote, as CBS News reported. Likewise, the only female candidate, Gwen Graham, is expected to win the Democratic primary, according to CBS News.

As for the ad itself, Twitter has a lot of feelings about DeSantis teaching his children President Trump's controversial politics. One Twitter user wrote, "GOP FL governor candidate Ron DeSantis is trying to out-Trump the competition. In a new campaign ad, he teaches his daughter how to 'build the wall' with toy blocks. WTF? We should teach children how to build bridges, not walls."

Another person tweeted, "I thought that this @RepDeSantis ad was satire. But nope, it's serious, and it's the creepiest thing you'll see in a while. What do Florida politicians smoke? #FL26"

Others were convinced the ad was a parody of sorts, because honestly it does look like something from a Saturday Night Live sketch. One Twitter user wrote, "Holy sh*t this ad by Ron Desantis, who is running for governor of Florida, is real. I had to read for about ten minutes before I could be convinced it wasn't a parody."

Another person tweeted, "This ad for Ron DeSantis is clearly a SNL Spoof!! Talk about deplorable!!"

Of course, DeSantis isn't the only politician to raise eyebrows with a concerning campaign ad in recent months. The DeSantis ad comes shortly after a disturbing video from another GOP candidate, Michael Williams, as Slate reported. This ad features Williams and his "deportation bus." (Yes, really.)

Along with Williams' approach to reach voters, Rep. DeSantis' new ad is also very disturbing. Even if the gubernatorial candidate was attempting to use some type of humor to appeal to his party, he certainly missed the mark. Because there's nothing funny about teaching children xenophobic and hateful views.