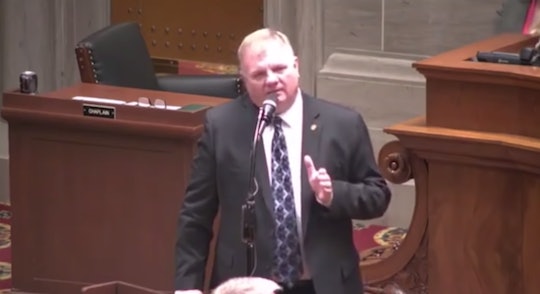 If you've watched the news or even glanced at headlines during the past couple of weeks, then you're probably aware that a number of states are attempting to strip women of their legal right to abortions. It's a frustrating — and terrifying — reality. Granted, there's a good chance these "heartbeat bills" and near-total abortion bans will be struck down as unconstitutional. But the rhetoric coming from the forced-birth standpoint has been astounding. In fact, this GOP lawmaker used the term "consensual rape," and Twitter rightfully dragged him for it.

These words came from the mouth of Republican Missouri legislator Barry Hovis ahead of lawmakers passing an 8-week abortion ban on Friday, May 17, according to CNN. Romper has reached out to Rep. Barry Hovis, but did not immediately hear back. Hovis was defending the bill (which provides no exceptions for rape or incest,) arguing on the State House floor on Friday that the eight-week abortion ban would allow rape survivors "ample time" to terminate their procedure. (You know, despite the fact that many women don't even know they're pregnant until after eight weeks.) He then referred to his experience handing rape cases during the 30 years he served on the Cape Girardeau Police Department.

“Let’s just say someone goes out and they’re raped or they’re sexually assaulted one night after a college party — because most of my rapes were not the gentleman jumping out of the bushes that nobody had ever met,” Hovis said, according to USA Today.

That was one or two times out of a hundred. Most of them were date rapes or consensual rapes, which were all terrible.

Yes, you read that correctly: Consensual rape. Never mind that "consensual rape" is an oxymoron. (Because rape, by nature of its definition, is something that happens against the victim's will.) Nope.

As disgusting as watching Rep. Hovis' remarks are, it's worth watching this clip to see Rep. Raychel Proudie step in to point out, “There is no such thing, no such thing as consensual rape.”

It's clear that Twitter agree with Proudie wholeheartedly. One Twitter user wrote, "I still can't get over this video of GOP Rep. Barry Hovis defending Missouri's draconian abortion ban (which would force impregnated rape victims to give birth) by suggesting that many rapes are actually 'consensual rape.' oh, and Hovis is a 30-year veteran of the police force."

Another person tweeted, "IF he misspoke it's only because he was equating date rape with consent as many ignorant people do. (Can't be raped if you know the person!) And he also seems to be ranking different kinds of rape by how bad they are. And he's a former police officer."

Yet another Twitter user wrote, "Why don't survivors come forward? You know why. Because of people like Barry Hovis."

Still another person tweeted, "People will rightly call out Missouri Sate Rep. Barry Hovis for this 'consensual rape' nonsense. But if you want to know what patriarchy looks like, it's the first words out of his mouth where he calls the violent rapists he encountered as a police offer 'gentlemen.'"

It's worth noting that Rep. Hovis later apologized for his remarks, according to The Washington Post "I’m not trying to make excuses,” he said. “Sometimes you make a mistake and you own up to it.”

Still, you have to admit using the word "consensual" to describe rape is no small flub. If there was any doubt in his mind before yesterday, Rep. Hovis is now acutely aware: Rape. Is. Not. Consensual.