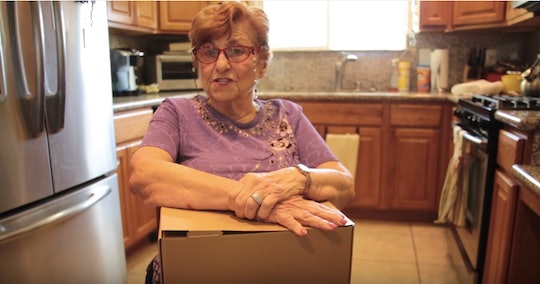 In a stunning move that has floored fashionistas (and fashionistos?) everywhere, we now know that someone out there doesn’t like Yeezys. This Grandma refused a pair of Yeezy Boost 350s, in the most hilarious and uniquely grandma-who-doesn’t-take-any-crap kind of way, and the Internet is applauding.

In less than 90 seconds, this Grandma utterly tears apart the Yeezys that she’s been given. She doesn’t seem to have a problem with Kanye West as a person — she likes his rapping! — but boy, is she ever unimpressed with his design skills. The reviews are officially in, Mr. West, and you have been found wanting.

I mean, all due Yeezy love aside, maybe she’s got a point about the box. After all, if you’re paying $200 for a pair of shoes, shouldn’t they come in a fancy box that can be used for other things? It would be nice, and it doesn’t seem like too much to ask. Hell, there are plenty of designers on Etsy who will send you a handmade necklace in a velvet box and not charge you extra, so what’s the big deal, Kanye? You don't strike me as a penny-pincher, sir.

My only issue with this video is that I'm not vaguely concerned for this woman's safety: I’m not sure it was smart to publicly air grievances about any product that came out of Kris Jenner's empire. Like, that's the last brand-protecting mama bear I'd want to mess with. Although, to be fair, I think this feisty lady could take her on, if anyone could.

Here are a few of the highlights from this raw gem of Internet greatness, in all their glory:

More Like This
Why It's Crucial to Get Good Sleep As A New Mom — Plus, Tips On How To Do It
Bright & Festive Nails To Rock On July 4th
Meet Your New Favorite Blazer(s)
Considering Getting A Tattoo While Pregnant? Here’s What To Know