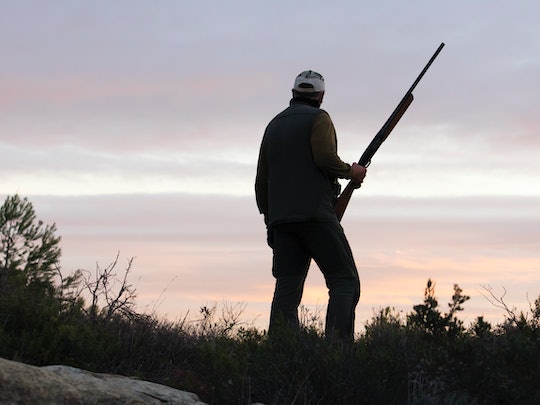 Tom O'Connor knows a thing or two about safe gun habits. Having been raised in Oregon’s Willamette Valley, O’Connor spent his earliest days accompanying his dad and grandfather as they would hunt birds — mainly pheasants and ducks — as well as bigger game. O'Connor’s family encouraged him to join them from a young age, eventually getting him his own 20 gauge single-shot shotgun to bring on their trips. Through the years, his dad and grandfather always emphasized safe gun storage and handling.

“They were real bears about safety and handling any kind of firearm,” O'Connor tells Romper. “My dad was in the military, in World War II, so I was always taught whenever someone hands you a firearm that you don't want to rely on them to make sure they are giving it to you carefully. You always needed to check it to make sure it's unloaded, you don't point it at anyone, really all the basics of hunting safety.” Having been in the Boy Scouts, O'Connor earned merit badges for rifle and shotgun safety and practiced target shooting during his summers.

At home, O'Connor’s dad kept a locked cabinet where the firearms were stored when not in use, and was very pragmatic, only allowing firearms to be loaded when he and his family were to go to hunting sites or firing ranges. “The practice of keeping your guns and ammunition locked away separately has gotten more emphasis in recent years and is a good one,” says O’Connor. “I really strongly believe in it.”

O’Connor echoes a sentiment felt by many gun owners, that even when talking to children about gun safety and even when you assume that your messages are getting across, it's the parents’ responsibility to store firearms out of reach, unloaded, and locked.

While O’Connor doesn’t hunt much anymore, he still enjoys going to the firing range. But as a gun owner and firm believer in gun safety measures, O'Connor believes that his could be a valuable voice in the conversation.

Tom cofounded Gun Owners For Responsible Ownership (GOFRO), an organization that advocates for safe gun storage, which includes storing your guns and ammunition in separate locked cabinets, as well as using trigger locks. “The basic message is that there are a wide variety of relatively inexpensive and readily available locking devices that are out there at all the major sporting goods stores and any place they sell firearms. .”

If you do not lock up your firearms securely, your risk of family fire - a shooting involving a gun left unlocked and loaded in the household - increases exponentially. Every day in the United States, eight children are unintentionally injured or killed as a result of family fire.

One of GOFRO’s biggest initiatives is to end family fire and keep families safe.

GOFRO demonstrates that gun owners can be part of the solution when it comes to preventing gun violence. GOFRO has been creating partnerships with other organizations that have similar mission statements, whether it be like-minded people in the medical community who view gun violence as a health epidemic or those who want to educate the youth on these matters, like Firearm Safety Among Children and Teens (FACTS).

“We've been doing some presentations and seminars with a local pediatrician and talking with other pediatricians and doctors about the importance of firearm safety [where] we demonstrate the locking devices and some of the safes," says O'Connor. "It's trying to focus on practical things people can do and hopefully getting folks a little more comfortable with talking about the issue and making firearm safety a part of basic safety around the home.”

While O’Connor continues to make great strides in his community and beyond, he knows his work is far from over. When speaking with new gun owners, O’Connor always wants to stress that the gun is a tool but also a very deadly tool. “As a gun owner you are responsible for ensuring that you are using it safely, that you are not endangering yourself or others, and that when you are not using it in the field or in the range that it needs to be locked up and secured so that, particularly if there are kids around the house, that they can't get access to it.”

The article is sponsored by the Ad Council and Brady, creators of the national End Family Fire campaign. For more safe storage resources and information, visit EndFamilyFire.org.