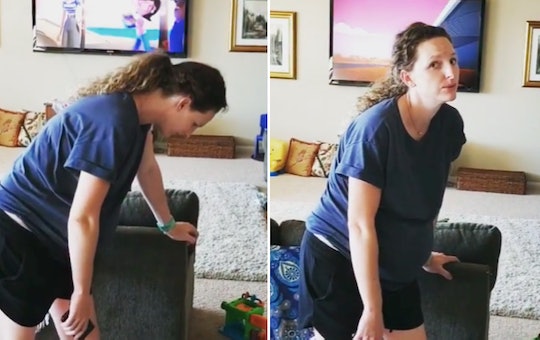 It should go without saying that giving birth is painful — like really painful. The contractions alone can cause such a seething pain that you may just see stars. But just because labor is painful, it doesn't mean the parents-to-be can't have a good laugh in the process. Case-in-point: This husband narrated his wife's home birth like it was an Animal Planet show, and while the death stare from mama is real, the moment is a laugh riot.

It goes like this: Carmen Woitas was in labor with her fourth child when her husband, Aaron, began recording the experience. As she's walking back and forth in her living, Aaron starts to narrate what's happening as if he's the late Steve Irwin hosting an episode of Crocodile Hunter. Carmen, wincing in pain, gives Aaron the only look as he films, which becomes a part of his voiceover, of course.

You can't help but fall into a laughing fit while watching the hilarious clip, which was shared to Instagram by their midwife, Lindsey Meehleis of Orange County Midwifery. The licensed midwife and educator captioned the Instagram post, in part: "When your clients almost make you pee your pants at their birth."

"Aaron is a jokester," Meehleis tells Romper in an interview. "When we walked in to set up for the birth, he walked into the bedroom and said, 'The wise shaman had arrived' and started playing his rendition of mediative music with drums and eagles soaring above… just to be funny."

She added, "He keep the mood light throughout the whole birth. While I didn’t pee my pants, he sure made me belly laugh hard."

Not surprisingly, people are loving the Crocodile Hunter-inspired clip as much as Meehleis, who described Aaron as "a big teddybear." Meehleis' Instagram post received more than 18,800 views and hundreds of comments as of Wednesday afternoon.

One Instagram user wrote, "This is a very brave man. Hilarious and what a clever way to keep the mood light and oxytocin flowing. Just awesome," while another commented, "I love that they had fun with a time that can tend to be pretty tense. And that mama bear is one tough cookie."

"The responses on social media were hilarious and just more proof that everything needs laughter," Meehleis tells Romper.

If you're wondering, Carmen and her newborn are healthy as can be. Meehleis took to Instagram to just hours after posting Aaron's hilarious Crocodile Hunter -inspired video to share an update with her followers.

"Humor worked beautifully for this family," Meehleis said. "Aaron kept everyone in such good spirits and it set the tone for this beautiful birth."

In the Instagram photo, Carmen is seen with a bright smile and holding her daughter — the first in her family — while still sitting in the pool where she gave birth. Meehleis wrote in the caption that Carmen "jumped in the tub" two hours after Aaron filmed his clip, and:

...pushed out her 9 pound 12 ounce baby into her arms! This is the first girl in their family to join 3 big brothers. She was super small compared to her last baby that was born at 11 pounds 13 ounces!!!!!!!!

"This couple is a couple that rises against all odds," Meehleis tells Romper in an interview. "They are incredible parents to their boys, and now first daughter. To go with their hilarious sense of humor, they even named all of their children after superheroes: Clark, Logan, Bruce Wayne & Karamia."

"We joked that she doesn’t give birth to peanuts, only [a] superhero," she added.

This isn't the first time one of Meehleis' clients has gone viral, though. In late August, the doula and prenatal yoga instructor shared a series of touching photos to her Instagram account that showed a dad actively participating in his daughter's home birth. The images, which show the mom, Steph Hendel, delivering her newborn, challenged how people view the birthing experience, and why there's an automatic inclination to sexualize something as nonsexual as labor.

In a way, Aaron's video achieves a similar goal. Where the photos of Hendel aim to normalize birth, the Crocodile Hunter-inspired clip asks viewers to "lighten up." In other words, although giving birth is intense, it doesn't mean it has to be too serious.

As Meehleis tells Romper, "Bringing love and laughter into everything that we do throughout our days could indeed change the world."