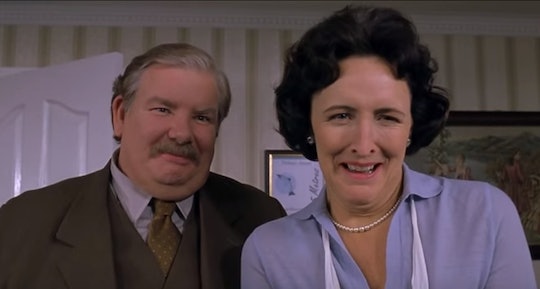 Alright, Potterheads, brace yourselves: A new Harry Potter fan theory is making the rounds, and this one's a doozy. According to Reddit user iShootWithaCamera, Harry Potter’s adoptive, Muggle parents, the Dursleys are connected to the Deathly Hallows. Wait...say what?

OK, let me backup and try to explain.

In the first three books, Harry receives three — and only three — Christmas gifts from his adoptive “parents,” i.e. Uncle Vernon and Aunt Petunia. (Emphasis on Christmas because, yes, Harry does receive socks from the Dursleys, but that is for his birthday.) They are small things, insignificant things, gifts meant to be so meager and that even in giving them they will show Harry he is not worthy of real presents (or of their time and love): a 50-pence piece, a toothpick, and a tissue. But they are also three things which, as iShootWithaCamera points out, seem to resemble the magical Deathly Hallows, i.e. 50-pence piece could be a stand-in for the Resurrection Stone, the toothpick is like a mini Elder Wand, and the tissue is like the Invisibility Cloak. And while this could simply be a strange coincidence, I’m not so sure (and many on Twitter seem to agree).

This isn't the first time Harry Potter, the Dursleys, and their collective Christmas "relationship" has been talked about. Late last year, Mona Torgersen of MoviePilot.com did her own write-up about the Christmas presents in question and in it, Torgensen questioned the Dursley’s intentions — in other words, did the Dursley’s actually care for Harry? (Maybe even just a little bit?) Torgensen explained,

It seems strange for the Dursleys to send Harry these incredibly cheap Christmas gifts, it's an awful lot of effort they have to go through just to send him a toothpick. [And] it's not really explained why they do [it either].

While Torgersen thought the whole thing was more of a joke than anything, “J.K. Rowling only added these gifts as a joke to emphasize just how horrible the Dursleys were,” she said. I don’t think it is quite so cut and dry — especially if you consider iShootWithaCamera’s theory and one of the other question Torgersen posed: How did the Dursleys (Muggles) manage to send packages to Hogwarts?

That’s right, folks. The plot thickens. Because based on this interaction between Severus Snape and Lily Potter from the original books — when the two were still students — this type of contact is unheard of:

Severus saw the envelope, and he couldn't believe a Muggle could have contacted Hogwarts, that's all! He says there must be wizards working undercover in the postal service...

If Snape was correct, this means that in order for the Dursleys to send Harry a Christmas gift they had to willingly get involved with the wizarding community. Either that, or — dun, dun, dun — these gifts were not from the Dursleys.

So here’s my take on iShootWithaCamera’s theory: Rowling has long-hinted the Deathly Hallows were planned, and planned for quite some time. This means iShootWithaCamera’s theory, that these gifts hinted at the Dealthy Hallows, is totally plausible. (I mean, why else are these objects shaped the way they are...and what they are?) But these gifts didn’t come from the Dursleys, at least not IMO. They came from someone inside the Wizarding community, perhaps someone inside of Hogwarts, and they came about as hints, or warnings — though I’m not sure which. So the question is not why the Dursleys sent these objects, but rather who sent these objects?

Either way, whether I am being optimistic or nostalgic or “just want to believe”, I’ve got to say I am a huge fan of iShootWithaCamera’s theory. Now we'll just have to wait and see if Rowling responds.