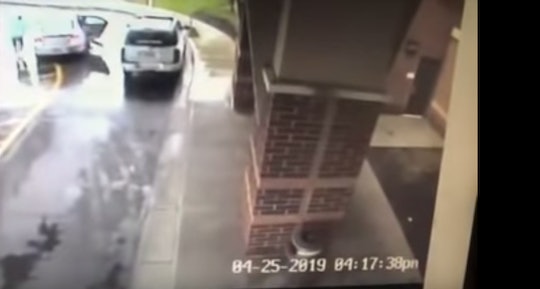 Every once in a while, you see something on the news that stops you in your tracks and makes you question everything. Because places that you once assumed were safe — like parked right in front of a hospital, for example — turn out to be crime scenes. Fortunately, in this particular situation, there's a happy ending. But things could have played out so differently if it weren't for one quick-thinking little boy. And this heart-stopping video of an 8-year-old saving his sister from a carjacker will leave you shook.

On Thursday, April 25, 10-year-old Skylar and her 8-year-old brother Chance were in the car with their great-grandmother, Nita Coburn, according to CNN. Coburn was dropping off a sick family member at Atrium Medical Center in Middletown, Ohio, and had briefly gotten out of the car to help her inside. That's when a man jumped at the opportunity — entering the car and starting to drive away with the kids inside.

It's one of every caregivers' worst nightmares, right? Watch what happens next, in the video below, if you think your parent heart can handle the intense series of events that unfolded.

In the video, you can see Coburn chasing after the car as soon as the carjacker starts driving away. "I heard them scream and I ran to the car," their great-grandmother told Good Morning America.

The back passenger's door of a moving white car then swings open — just as Coburn catches up to the driver's door and tries to yank it open. "My brother went to go grab me, opened the door, and went out," Skylar told GMA. "My brother fell out, but the guy pulled me back in the car." The man had allegedly grabbed Skylar by her hoodie.

Thankfully, though, Chance was able to wrestle his big sister away from the carjacker — and both of them fell to the ground, unharmed. "I was acting in the moment because I didn't want my sister to get hurt," he told GMA.

At first, Coburn didn't see the children fall out of car on the passenger's side, so she kept ahold of the driver's door, WPCO reported. She was dragged roughly four car lengths before letting go, according to police. That's when she saw her great-grandchildren running toward her. "That car didn’t bother me at all," Coburn told WPCO. "It was them two babies. No one needs to feel that fear. No one does."

Chance is rightfully being hailed a hero for his quick thinking and bravery. "What Chance did was extremely heroic," Middletown police officer Connor Kirby told WPCO. "It shows how extremely brave he was and how much he loves his sister."

According to police, the carjacker only made it blocks away before he was arrested, CNN reported. He is now facing charges of kidnapping, grand theft, and felonious assault. As he should.

I shudder to think what could have happened if it hadn't been for Chance's quick thinking. (My mama heart can't even go there, guys.) And man, that video. Although I'm sure instances like this are rare, it's still a chilling reminder to remain vigilant and aware of my surroundings when children are under my care in a public place. Because as this video clearly shows, all it takes is a few seconds. Even if it's just outside of a hospital.