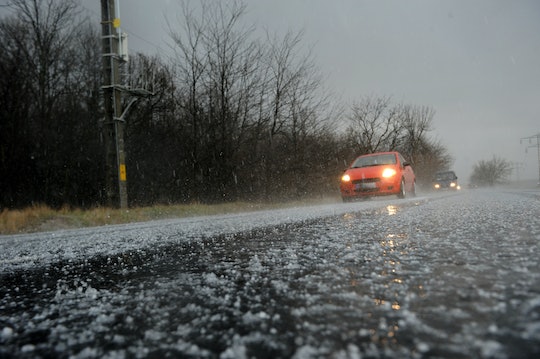 Few things in life compare to the love a parent holds for their child. Sure, sometimes kids have a way of getting on mom and dad's last nerves. (And we all need a break every once in a while.) But when it comes down to it, most parents would be willing to put their own lives in danger if it meant protecting their babies. And this heroic mom who shielded her baby from tennis-ball sized hail deserves an award.

On Thursday, Oct. 11, an Australian mother named Fiona Simpson set out on a drive with her grandmother and infant daughter, Clara, to a coffee shop, People reported. When it started raining so hard that she couldn't see, Simpson pulled over to the side of the road. Then it started to hail —and it quickly became clear this was no ordinary storm. “The back window, where Clara was, the whole back window just blew out … glass went everywhere through the car,” she told The Project. “So I took off my seatbelt, climbed through the back and just laid on top of her.”

The severity of this freak hail storm is pretty obvious, especially if you take a look at the photos Simpson shared on Facebook of her injuries. (I mean, holy crap, right?) "It was so scary but there was no time to be afraid … It just all happened so fast,” told Australia’s ABC broadcaster, according to the Independent. “I looked down and I could see she was screaming but I couldn’t even hear her, that’s how loud it was.”

Once the storm finally passed — and Simpson's back, arms, and head were seriously bruised and battered by the large hail — the young mom was able to drive her car to a house nearby to call for medical attention. “It wasn’t until I got in the ambulance that I realised that if I didn’t do that [my daughter] could have been seriously hurt or killed, anything could have happened,” she told the news outlet. “I’m just a mum — you do anything you can to protect your child no matter what, even at your own expense and I would do it again.”

Let's just say Twitter was seriously impressed with Simpson's actions. One person wrote, "Toughest mother in Australia! this brings tears to my eyes. I hope she and her bub are ok. She is a warrior!"

Another Twitter user wrote, "She has the best reward possible, her baby is OK. But I hope some really special treat is headed her way."

Yet another Twitter user pointed out Simpson has some serious leverage as her daughter gets older. They wrote, "That kid does anything wrong in the future and she's going to say 'I protected you from hail with my own body and you can't clean your room just once?' Your mom's a saint, kid. Better take care of her!"

A People reported, Simpson posted an update on Facebook later on Thursday, noting that both she and Clara were at home and safe. Her grandmother, however, was recovering at a hospital. In the end, baby Clara only had a few bruises and bumps — all thanks to her mom's quick actions. “She’ll be alright. She hasn’t even really noticed, to be honest,” Simpson told The Project. “We’ll all be fine. We’re tough.”

Granted, I've never been in a situation where I've had to literally shield my child with my own body — but I'd like to think I'd do the same if I were ever in a similar predicament. I'm just glad this mama, her grandmother, and baby Clara are all okay after their traumatic experience. Because honestly, if this mother's bodily sacrifice isn't a testament to just how incredible moms really are, then I don't know what is.