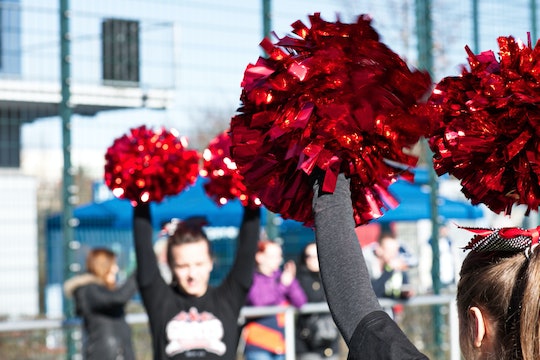 If you've seen Bring It On even once (or, if you're like me, 1,000 times), you know just how intense high school cheerleading tryouts can be. But at one New Jersey high school, a recent change to that intensity is causing a lot of drama. Hanover Park High School's cheerleading team has a new policy that has sparked a huge debate among parents, with no solution in sight, as reported by News 12 New Jersey. (Hanover Park did not immediately respond to Romper's request for comment.)

The East Hanover, New Jersey, high school held cheerleading tryouts on April 13, after which some students were cut from the team. Considering how cutthroat the sport can be, it makes sense that not everyone made the cut. However, a parent of one of the students who did not get onto the team called the athletic director to complain, and the team's policy was changed: now any student who wants to participate in cheerleading is allowed to join the team.

The issue has continued to escalate over the last month, and the principal threatened to cut the entire cheerleading program from the school, according to News 12. While the parent who called the school and the students who didn't make the team originally have been happy about the rule reversal, those who did make the team had a few complaints, according to News 12 New Jersey.

I tried my hardest. Now everything is going away because of one child who did not make the team. And their parent complained so now all my hard work has been thrown out the window.

The outlet also spoke with Jada Alcontara, a sophomore, who added:

I came up here to state that I did not put in 18 months of work to lead up to this moment, just to be told it didn’t matter anymore.

Because some of the students were so passionate about how unfair the new policy was to those who worked hard to get on the squad, they took action. Together, 10 team members and their parents contacted the school board, proposing that the policy be changed back. The school board's president told News 12 New Jersey that the board plans to deliberate the issue before making a decision at some point in the future, adding that the decision "was made in the best interest of all students and was made to be as inclusive as possible."

Parents are debating the issue from a number of angles. They say judging cheerleading is more subjective than it is for other sports, as there's an artistic element to it. Coaches' judging could favor the artistry more than the acrobatic skills, and thus some students who have a lot of acrobatic skill but less dance skill might feel like they have been unfairly cut.

However, some are worried that accepting anyone who wants to be on a sports team is like giving out "participation trophies." The cheer students and parents who are petitioning the East Hanover school board believe squad members should only be able to earn spots on the team through successful tryouts and working hard, not by default, explains News 12 New Jersey. Parents have previously argued in similar cases that the real world does not give out participation trophies, and after graduating high school, it becomes clear that hard work is often required to achieve things. While letting everyone onto the tee-ball team and handing out participation trophies in elementary school can be a good thing, teaching children the necessity of hard work in high school can be an infinitely valuable lesson.

There have been a variety of studies on rewarding participation, with some experts agreeing that participation trophies are mostly beneficial for younger children. Dr. Joe Evans, a child psychologist and director of the University of Nebraska Medical Center’s Munroe-Meyer Institute’s child psychology program, told the Huffington Post that participation trophies help young children gain an interest in sports. He also explained that they are meant to reward kids for making an effort, adding that, "If you only gave achievement awards, we’d only have two or three kids playing ball."

However, in a study published on SAGE Journals, researchers found that parents praising their kids' schoolwork too much or too little can lead to "poorer school performance and higher depression in children." In relation to Hanover Park High School's cheerleading team, the study suggests that those who are put on the team despite not being skilled enough could wind up performing poorly in comparison to their peers, which could lead to depression.

Not to mention, kids who aren't actually skilled enough might not get the chance to participate as much as their teammates. This does not apply to cheerleading as much as other sports, because in cheerleading, typically every team member will be a part of the team's routine for competitions (though the less talented students could be resigned to swaying in the background). But in sports like basketball and baseball, students who are let on the team despite not being very good will likely get benched a lot, which is no fun for anyone.

Hopefully the school board's impending decision on this matter is one that all the students who tried out for the cheerleading team can get behind.