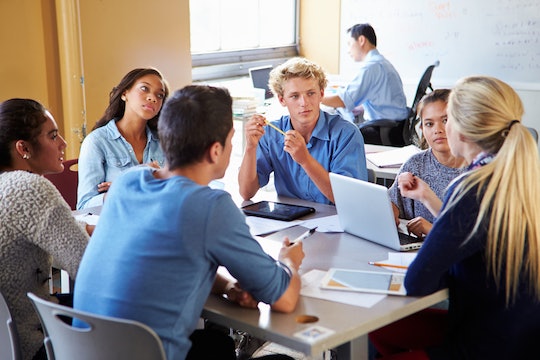 This High School's "Adulting" Conference For Seniors Is Seriously Genius

When I was in junior high and high school, there were still plenty of home economics classes offered. There, we learned how to sew a couple of simple projects, bake a few things, balance a checkbook, and probably plenty of other practical skills that I can't quite remember at the moment. Granted, balancing a checkbook by hand is outdated now. And knowing how to sew a pillowcase isn't a skill I've ever used since. But considering home-ec classes are all but gone from schools these days, it was better than nothing. Which is why this high school's "adulting" conference for seniors is seriously genius.

As People reported, Bullitt Central High School in Shepherdsville, Kentucky, held the "adulting" conference in December for its senior class. Students had the opportunity to choose up to three of the 11 workshops offered — which taught them real-life skills like filing taxes, cooking in a college dorm room, and even changing a tire. Judging by the photos posted on the school's Facebook page, other possible workshops included creating a resume and the details about savings and checking accounts — which are definitely good things to know about before heading off into the real world.

This adulting day was made possible thanks to contributions from several community partners, including: the Center for Women and Families, KHEAA, the US Army, the Shepherdsville Police Department, and UPS, according to People.

Christy Hardin — who is the director of the BCHS Family Resource & Youth Services Center — is the one who organized the event. "I think that the idea occurred to me originally, I saw a Facebook post that parents passed around saying they needed a class in high school on taxes, and cooking," Hardin told local NBC affiliate WAVE. "Our kids can get that, but they have to choose it. And (Adulting Day) was a day they could pick and choose pieces they didn’t feel like they had gotten so far."

The feedback has been largely positive. One Facebook commenter wrote:

So it's like Home Ec and Shop and Music and PE, What a Great Idea. Thank you for bringing this into schools again.

These days, home-ec classes have been replaced with family and consumer sciences (FCS) courses. But their presence has been gradually lessening through the years, according to NPR. In 2012, for example, there were about 3.5 million students enrolled in FCS high school programs — 38 percent fewer than were enrolled 10 years earlier, according to the publication. It's no wonder millennials are flocking to "adulting" classes like nobody's business.

Confession: I still don't know how to change a tire. Seriously. My skills in the kitchen are phenomenal, though — if you consider boiling pasta and heating up chicken nuggets in the microwave cooking. And this is with having had home-ec class in school. So I can't imagine the basic tasks today's seniors are clueless about.

If you ask me, holding a crash-course "adulting" conference like the one held in Shepherdsville, Kentucky, is a clever way to make sure seniors have some idea of how to function after high school. And I have a feeling more schools could be following suit.