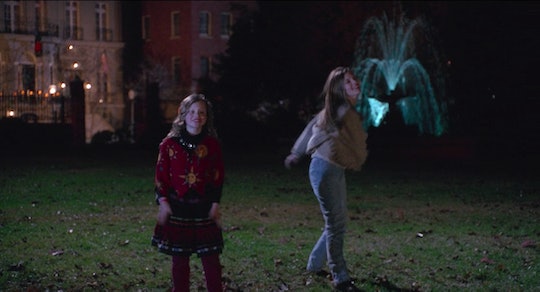 Who knew the Sanderson Sisters and Ross, Rachel, and the rest of the Central Perk crew would ever cross paths? Well, apparently Hocus Pocus has a subtle connection to Friends that you probably haven't noticed every time you watch the '90s Halloween classic.

If you're currently marathoning Friends on HBO Max, then you're probably very familiar with the iconic scene from the opening credits. The cast together on that iconic orange couch, splashing in what's supposed to be a New York City fountain while dancing to "I'll Be There For You" by The Rembrandts.

Internet sleuths with a keen eye for detail have spotted the same fountain and backdrop in Hocus Pocus, which you can stream on Disney+. The scene takes place 1 hour and 3 minutes into the film, right as Max, Dani, and Allison are celebrating what they think is the defeat of the Sanderson sisters. While Max tries to convince Binx, the cat, to come home with them, Dani and Allison frolic in a field in front of gorgeous buildings and a fountain. And that fountain, according to People, is the same fountain from the Friends opening credits.

Hocus Pocus takes place in Salem, Massachusetts and parts of the movie were shot on location, according to Good Housekeeping. But scenes were shot on the Warner Brothers ranch in Los Angeles, California, the same exact place where the Friends opening credits were filmed, according to Entertainment Weekly, even though the show technically takes place in New York City.

Seeing the fountain in Hocus Pocus is a total "blink and you'll miss it" kind of moment, especially since it was shot from a different angle, and Allison and Dani don't actually get up close and personal with it like the actors in Friends do. As it turns out, dancing and splashing that takes place in the opening sequence wasn't really planned at all, as Greg Grande, the set director for Friends, explained to Entertainment Weekly last year. "They were just happy to hang out and have a few cocktails probably," he told the outlet. "I don't want to say who started it, but one of them did and they ended up inside the fountain. And that was some of the best footage. It was kind of an impromptu, wonderful moment."

While this discovery is certainly exciting, it isn't new, of course. Disney and Friends fans have been pointing out the fun connection every October for a few years now. After all, Hocus Pocus was released in July 1993 which was a little more than one year before Friends premiered on NBC in September 1994.

You can actually visit this iconic fountain when you go on the Warner Bros. Studio Tour, which also includes a stop at the Central Perk set. However, the tour is temporarily closed at the moment due to the current coronavirus pandemic, so you won't be able to splash around or celebrate the defeat of three evil witch sisters. In the meantime, you can spot the connection for yourself by streaming Friends on HBO Max and Hocus Pocus on Disney+.