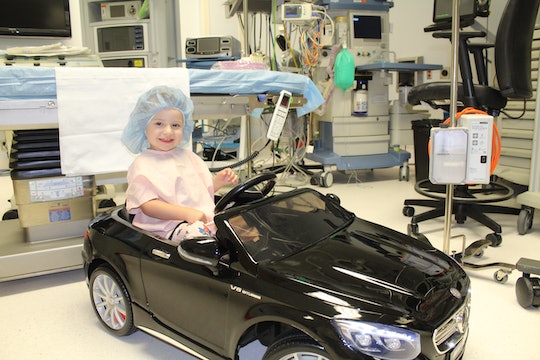 Surgery is a daunting experience at any age. And for children undergoing procedures, the nerve-wracking decision is entirely out of their hands. But a hospital in Modesto, California, is giving children the power to ease their stress and begin their road to recovery in an exceptional way. Doctors Medical Center is letting kids drive into surgery in the cutest mini cars to help reduce their tiny patients’ fears and anxiety.

The hospital currently has two vehicles for its younger surgical patients as a way to calm their nerves before they head to the operating room, according to CBS News. The center first purchased a black Mercedes and was recently donated a second pink Volkswagen Beetle by a hospital employee and her family, according to the Daily Mail.

Doctors Medical Center recently posted a video on Facebook of a young girl, who is a child of a hospital employee, happily driving to surgery in her small Volkswagen while wearing a hospital gown and cap with a doll passenger by her side. “We can see the stress and anxiety melt away when they hop in the car,” the center explained in the post.

Indeed, Caroline, the girl shown in the video, is all smiles in her new ride.

There’s also another option for little patients who don’t want to drive their own mini convertibles, according to Fox13 News. The cars, intended for children ages 2 to 7, can also be operated by remote control, the news outlet reported.

Employees at the medical center hope the new tradition will help relieve stress and mitigate fears prior to surgery, something rolling away in a gurney does not offer. “When the children find out they can go into the operating room riding in a cool little car, they light up and in most cases, their fears melt away,” pre-op nurse Kimberly Martinez and the originator of the idea told Romper. “In addition, when parents see their children put at ease, it puts them at ease as well.”

Martinez also noted an immediate difference since the hospital introduced the stress-relieving vehicles last year and expresses hope for lasting impact, as reported by the same article. “She did some research and found the benefits of these cars having a lasting impact on young patients,” hospital spokeswoman Krista Deans told KTVU about Martinez’s unique initiative. “Having something to keep their mind off of heading into surgery is a good thing.”

The one-seater cars come equipped with a stereo, an MP3 player, and a collection of already downloaded music, according to People. In addition, according to Fox8, the little luxury cars have doors that open, functioning headlights, taillights, dashboard lights, a seatbelt, and a horn.

“These sweet rides take our smallest patients to the operating room,” the hospital said in another post two weeks ago with the introduction of the new pink Volkswagen Beetle. “The goal is to reduce anxiety and stress, and make the experience less scary for everyone involved.”

So far, it seems like the luxury car is doing its job and is making the whole world say "awww" in the process.