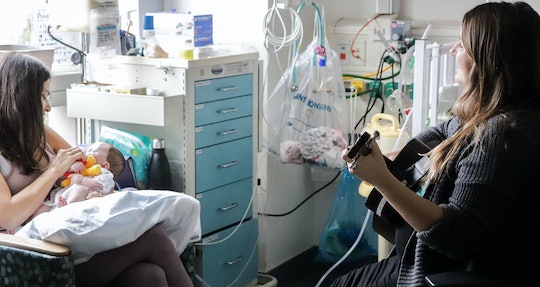 When babies are born premature and wheeled off to the NICU, many parents struggle with feelings of helplessness. The instinct to be the one to care for your child can be strong, and letting go and leaving it all in the capable hands of medical professionals can be hard. But this hospital's lullaby pacifier for NICU babies may be the unique tool that can empower parents to help their babies thrive during this time.

Researchers at UCLA Mattel Children's Hospital are testing what they call a "pacifier-activated lullaby (PAL) device," which plays a recording of their parents singing a lullaby whenever they successfully suck on their pacifier, according to a statement released by the hospital.

Kristina Casale, a music therapist in the NICU at UCLA Mattel Children's Hospital, explained to Romper how that sucking reflex is crucial to premie babies' survival. "Premature infants in the NICU, especially born before 34 weeks, often struggle with oral feeding," she says. "They typically haven’t developed the reflex to suck, breathe and swallow, which inhibits their ability to gain weight."

That's where the the PAL comes in.

Music therapists serving in the NICU work alongside parents to help them write and record a special lullaby to use with the PAL. The song stops and starts as the baby sucks on their pacifier. “Hearing their parents’ voices is an incentive to keep sucking,” Jenna Bollard explained in the statement, expressive arts therapies manager at UCLA Mattel Children’s Hospital, who conducted the research.

Casale went on to explain how this FDA-approved medical device encourages and reinforces the development of non-nutritive sucking, or (NNS).

"The PAL encourages preemies to strengthen their oral feeding by playing soft music that’s appropriate for the baby’s developmental stage — typically, below 60 decibels, with a repetitive cadence, and lacking unpredictable, jarring noises — when the baby sucks on the pacifier connected to the device," she tells Romper. "Bollard’s research is intended to determine whether use of the device improves babies’ abilities to feed on their own and gain weight naturally, thereby shortening the time they have to spend in the NICU."

The PAL "provides positive feedback in the form of music/mother’s voice as an auditory input in direct response to effective sucking," Casales says.

In order to help reinforce those feeding behaviors, the team of music therapists at UCLA work with parents and help them write, sing, and record a special song for their baby. In addition to the clinical Music Therapy goals geared towards healthy growth and development — i.e., relaxation, increasing toleration to stimuli, regulating vitals, promoting bonding and encouraging NNS endurance with the PAL — Casales says that the services provided also "focus on providing stress management and an outlet for emotional expression for caregivers"

The science behind this innovative idea appears to be sound. According to UCLA, the researchers have found that 70 percent of babies who have their pacifiers hooked up to a PAL device improve their proficiency with a pacifier, a necessary skill for babies to eat unassisted that results in shorter hospital stays.

And babies aren't the only ones reaping the benefits of PAL — parents are empowered in the process and reduce stress. “Giving parents a way to be part of their babies’ treatment helps them feel more bonded with their baby and gives them a very important role in their health and development,” Bollard said.

The Martynus family can testify to the success of the PAL device. Their triplets — Ada, Kian, and Nico — were born prematurely last July at just 31 weeks. They are now 7 months old and thriving.

Their early arrival left the triplets incapable of sucking, swallowing, and breathing independently. Without this necessary reflex, they were struggling to feed and gain weight. During their 52 days in the NICU at UCLA Mattel Children's Hospital, the triplets were under the constant care of their parents Jana and Gregor, as well as a team of nurses, physicians, and other staff members. The medical professionals were assisted by a group of music therapists who offered the PAL device to the family.

Gregor tells Romper that he and his wife were curious about the trial and decided to give it a go. They recorded a custom version of the Bob Marley song "Three Little Birds," which has special meaning for their family.

"When we moved into our new apartment, we bought a wall decal [with the song lyrics] to decorate a pillar next to our bedroom window," he says. "We liked that the song text is about the sun rise, which we can see beautifully through that window.

He added, "It got a whole new meaning when we found out that we are having triplets. When the kids arrived, it was a natural choice for us to sing it to the kids."

And Gregor says the song worked well for their three little birds. "Music therapy is great for both babies and parents," he tells Romper. "It calms the babies which helps them sleep and eat. It calms the parents, too."

Gregor also says that he feels the music therapy helped him to emotionally connect with the triplets.

Overall, Gregor feels that the experience was a positive one. He tells Romper that he and his family are "grateful for the time spent in the NICU," despite the emotional battle that comes with seeing their "tiny babies with all the cables and tubes in such a sterile environment." But he had faith in the hospital staff to get them through it all, he explains:

All the nurses and doctors have been amazing. We felt that our babies were in the most capable hands possible. We loved how much the nurses involved us in the babies’ care and that they used every opportunity to teach us everything we need to know when the babies come home ... When we took our triplets home after 52 days, we felt confident and well prepared, the kids were in a perfect schedule which we continued at home.

The PAL device has yet to hit hospitals near you, but it has certainly yielded promising results thus far. And the good news is, the project is far from over.

Casales tells Romper via email that "thanks to a grant renewal from the Music Man Foundation and a gift from a private donor, we will be conducting more research starting in June that focuses on evaluating the impact of regular music therapy services, parent self-care groups and continued use of the PAL on caregiver mental health in hopes to improve the quality of care."

She added that they will also be "providing staff support groups and continuing to encourage an environment that promotes safe emotional expression, stress management, bonding, and familial involvement."

Healthy babies, empowered parents, and a unique lullaby that will last a lifetime — does it get any better than that?