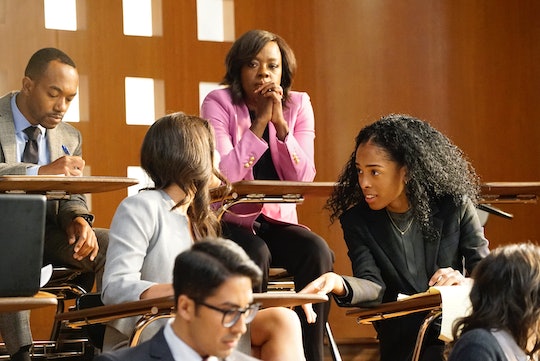 You're Not Going To Like This 'HTGAWM' Theory About Annalise

For five years, How to Get Away with Murder fans have been hit one mystery after another, and as the series winds to an end, there are still a few major questions that need to be addressed. I’m sure the show will leave viewers with closure for most of its storylines, but there’s one HTGAWM Season 6 Annalise theory that may bring fans to tears.

The theory comes from Redditor jadedthealien, who questioned if Annalise (Viola Davis) might die in this final season. The responses to the post were mostly optimistic, suggesting there could be no way her character could die. “I think this final season will be about her forward momentum on her path to redemption and personal growth,” wrote Reddit user Lorsti11. “She’ll be cutting ties (or having ties cut) to her previous life so she can start a new one - a metaphorical death. I do think important people in her life are going to die - her parents, most probably but also I’m thinking of those pillars of her life - Frank and Bonnie. It will be terrible and sad but necessary for Annalise to get away with murder and move on.”

I know fans aren’t ready to say goodbye to Annalise, but I think there could be a scenario where she dies. For five seasons, she’s been covering up murders, and if that fact were to get out, she would be facing major criminal charges and potential jail time. If that were to happen, I could see her faking her own death, creating a scenario in which she would avoid going to jail. Of course, this is just my take.

The cast and crew have been tight-lipped about what’s to come this season, but in an interview with TV Guide, showrunner Pete Norwalk did mention that the characters will have to decide whether or not they want to face the music for their crimes.

"It's called how to get away with murder, and I don't know if you really can," he said. "I definitely don't know if all of these characters can — so they're all going to have to decide who they want to be and what they want to stand for, whether that's justice, meaning confessing to their sins, or do they just want to run away and escape and will the guilt eat them alive? — Everyone is going to be forced to answer that question for themselves. Do they want to be a typically good person or a bad person, and who do they have to hurt to do that?"

He also confirmed that someone will die this season, but didn’t reveal any specifics. “There will definitely be one death if not more [this season],” teased Norwalk. “These people have been living with the highest stakes of stress and pressure and life or death that anyone can live with, and I don't think everyone can survive."

So, while fans may not be interested in seeing Annalise die this season, her character will have to come to terms with the illegal activity she’s partaken in the last few years. I think the ultimate ending would involve Annalise getting away with murder one last time, but in this case, it would be her own.