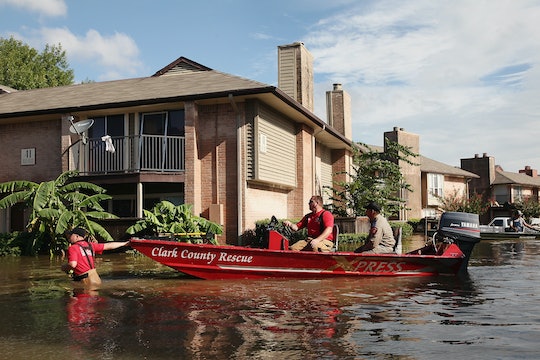 This Map Shows Where Hurricane Harvey Flooding Is The Worst

As the world watches the disaster in Texas unfold, it can be hard to figure out the best way to help the victims. Which areas were the hardest hit? Who has the greatest need for donations? And which charities are best at dispersing them? This Hurricane Harvey map shows who needs your support the most, based not only on how badly the flood hit them, but what their situation was before the storm struck.

The non-profit emergency response charity Direct Relief used data from the Centers for Disease Control's Social Vulnerability Index to highlight those in the path of Harvey that were most at-risk based on criteria such as age, disability, income, and immigration status. As explained on the charity's website, age and disability can present medical or mobility challenges to evacuation. Low-income hurricane victims may lack the resources to evacuate (cars and hotels aren't free), and fear of discrimination or even deportation may keep immigrants and non English-speaking residents from reaching out for help. According to the U.S. Census Bureau, 9 percent of Houston residents are over age 65, and 6.8 percent of those under 65 are disabled. The city's poverty rate is 22.5 percent, 43.8 percent identify as Hispanic or Latino, and 47.1 percent speak a language other than English at home.

In addition to immediate evacuation assistance, the majority of Houston residents will also need financial assistance repairing or replacing their homes once the flood waters recede. Most renters' and homeowners' insurance doesn't cover flooding, and according to the Washington Post, only 17 percent of homeowners in the hardest-hit areas have flood insurance. Homeowners who live in high risk areas designated as Special Flood Hazard Zones are required to purchase policies through the federal government's National Flood Insurance Program, and the average policy costs more than $500 per year, with many rates climbing into the thousands. According to the Associated Press, most of Houston isn't considered a Special Flood Hazard Zone.

Houston has long been prone to flooding, according to ABC News, thanks in part to its low altitude, proximity to the coast, and clay-based soil that hinders drainage. But things are getting worse. For decades, scientists have been warning that climate change will bring about more severe weather events, but Houston's vulnerability is compounded by recent overdevelopment, according to NPR. As the area's prairies are paved over and built upon, Houston has become simultaneously more populous and less able to absorb flood waters. However, its flood risk status hasn't been updated, because FEMA relies on decades-old data to determine flood zones. Rising flood insurance premiums have caused many residents to cancel their policies, and those without coverage will have to rely on grants from FEMA, which are limited to $33,300, although the Post reported that most receive much less. If you're able to provide financial assistance to Hurricane Harvey victims, you can donate to Direct Relief, or check out Charity Navigator to find another highly-rated nonprofit.