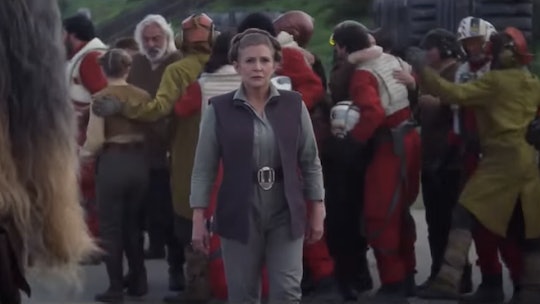 News of Carrie Fisher's death spread across the internet on Tuesday with lightning speed, with fans everywhere posting condolences and memories of the 60-year-old actress. Within the wide-reaching Star Wars fandom, those who grew up watching Princess Leia battle it out with both the dark side and her eventual (and temporarily real-life) flame Han Solo took the loss especially hard. Over the course of several decades, Fisher played an array of notable and memorable characters, in movies like When Harry Met Sally and Blues Brothers, but it was her return to the Star Wars franchise in the 2015 installment, The Force Awakens, that had everyone talking — and one soon-to-be iconic Fisher scene in particular proves exactly why fans, specifically women and little girls, will mourn her loss deeply.

Star Wars: The Force Awakens was undoubtedly the biggest blockbuster of 2015, raking in some $2.068 billion in global box office totals. Fisher, in comparison to the rest of the cast, enjoyed less screen time than her colleagues, but because of the iconic character she brought back to the big screen, didn't need nearly as much to make a memorable impact. From the moment the big doors on that carrier opened to reveal the real leader behind the fight against the First Order, General Organa (as she's known to those under her command), had everyone's attention — both those onscreen and in the audience.

Perhaps even more moving than Leia's reappearance in The Force Awakens — on par with her general reconciliation with Han over the loss of their son — was Fisher's side-by-side scenes with the film's protagonist, Rey, played by Daisy Ridley. From the outset, the duo's relationship seemed headed toward that of a mother and daughter — a theory some still believe may be proven in future installments — but as the film progressed, it became evident that, no matter what their actual relationship may be, blood or otherwise, Leia and Rey's relationship was crucial to the series and more touching than most.

In one scene, specifically, this closeness plays out in an embrace that says more in its wordlessness than it would peppered with dialogue: Han has just been killed at his son Kylo Ren's hand, aboard Starkiller Base, and the Resistance has taken out the base's planet-destroying laser weapon system. After the Resistance fighters — including Rey and Han's longtime co-pilot Chewbacca — land at their own base on D'Qar once more to celebrate the victory, Leia and Rey share a moment that reads as a meaningful coming together of two iconic female characters, hugging one another as they mourn Han's loss.

Answering early fan complaints that the moment should have been given to Leia and Chewbacca, J.J. Abrams in 2015 admitted that he felt he may have made a mistake, telling Slash Film,

My thinking at the time was that Chewbacca, despite the pain he was feeling, was focused on trying to save Finn and getting him taken care of. So I tried to have Chewbacca go off with him and focus on Rey, and then have Rey find Leia and Leia find Rey. ... Had Chewbacca not been where he was, you probably wouldn’t have thought of it. But because he was right there, passed by Leia, it felt almost like a slight, which was definitely not the intention.

Still, Abrams argued, the moment was incredibly important in its own right:

The idea [was] that both of them being strong with the Force and never having met, would know about each other — that Leia would have been told about her beyond what we saw onscreen and Rey of course would have learned about Leia. And that reunion would be a meeting and a reunion all in one, and a sort of commiseration of their mutual loss.

The hug, perhaps, though controversial, was one of the more quietly powerful moments of the film, and perhaps the entire series — a passing of the torch between two dynamic and stereotype-bucking characters whose traditional femininity comes second to their important storylines, and whose will to fight for the good of others is perhaps stronger than most characters in the franchise.

"Obviously Princess Leia and Carrie are a source of inspiration for girls for the past 30 years ... I guess there’s no other way except to say that [Rey] will have some impact in a girl power-y way," Ridley said during a Los Angeles press conference in December last year, according to People. "But obviously we started with Leia and Leia’s still there kicking ass."

In response to the same reporter inquiry, Fisher joked, "[I was the] only girl on the all-boys set [for the original Star Wars.] I am the beginning of girl power. Deal with it!"

While dozens of Star Wars scenes from over the years could be counted among those blessed with the "iconic" label — including Fisher's "I love you"/"I know" exchange with co-star Harrison Ford (Han Solo), Darth Vader and Luke Skywalker's lightsaber battle, and the Death Star trench run — it was this most recent, wordless exchange between two memorable female characters that feels historically crucial to the franchise's ongoing success, and marks yet another win for little girls everywhere, hoping to see themselves reflected on the big screen.

"You paved the way for all the girls," Ridley told Fisher in an October 2015 sit-down with Interview magazine, referring to her Star Wars legacy.

The torch now passed to Ridley, it's safe to say, though Fisher's loss is still painful, that the tradition of women at the helm of sci-fi blockbusters is in good hands — just as Fisher would have wanted.