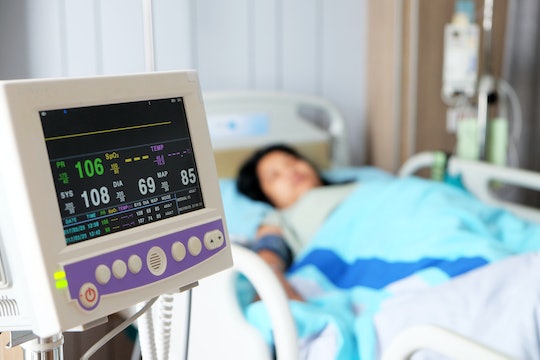 Although thinking about your own death is never easy, making your end-of-life wishes explicit is really valuable, even if you're young and healthy. Not only does a living will let you specify what kind of life-saving measures you would and wouldn't want, it also takes the burden of having to make that decision off of your loved ones. The only problem? If you're pregnant, your wishes may actually be ignored entirely: an Idaho law forces families to keep pregnant women on life support regardless of what they've indicated on their advance directives, according to Slate, and while at first that may seem like a useful loophole acknowledging that a woman might feel differently about her end-of-life wishes if she's pregnant, the reality actually seems to be quite different. That's because instead of protecting the rights of pregnant women to make the decision that feels best for them, the law appears to primarily function to take away their decision-making power all together.

To be fair, pregnancy isn't exactly a time when anyone wants to think about ending up on life-support, and in most cases, women who choose to remain pregnant do so hoping that they and their babies will go on to be healthy, safe, and happy. Unfortunately though, that isn't always the case. And when something tragic occurs, there isn't just one outcome that would be best in all scenarios.

For some women, the answer is that they would want to be kept on life support no matter what in order to give their baby a chance to be born healthy, while for others, the situation is more nuanced. Remaining on life-support indefinitely may not feel like the right choice to a woman who is very early on in her pregnancy, for example, nor may it be the right decision to a woman whose baby is unlikely to actually survive. In any case, it seems like that should obviously come down to the woman herself, taking into consideration her own personal beliefs and wishes, as well as the implications that each option may have on her child, partner or loved ones. After all, even a full-term, healthy child, would still need to be raised and nurtured in their mother's absence: getting the baby to delivery is only the beginning.

It's the kind of intensely complicated and emotional situation no one hopes to go through, yet, as women in Idaho have learned, in the eyes of the law, it's actually considered surprisingly straightforward. In general, anyone of sound mind who is over the age of 18 can complete a living will in Idaho, according to the website of the Idaho Office of the Attorney General, and it will come into effect once a doctor "has certified that [they] have a terminal condition and that death is imminent." Sounds fair, right? Well, not so fast. Although every adult in Idaho has the right to make a living will, as well as the right to change or revoke it at any time so long as they are still of sound mind, pregnancy is apparently the only exception. The website states that, if an adult woman becomes incapacitated while pregnant, "life sustaining measures will continue regardless of any directive to the contrary until the pregnancy is complete." Meaning, a pregnant woman can be kept on life support against both her and her family's wishes for the duration of her pregnancy.

In response to that stipulation, four women sued the state of Idaho Thursday, arguing that the law — outlined in the state's Medical Consent and Natural Death Act, according to The Idaho Statesman — discriminates against pregnant women, and "violates the due process and equal protection clauses of the United States Constitution." Though the state has not yet responded to the lawsuit, Kevin Díaz, the national director of the advocacy group Compassion & Choices, who helped file the suit, said the law "[forces] pregnant women to receive treatment until the end of their pregnancies, regardless of their wishes in their health care directives, their physicians' instructions or recommendations, or any other circumstances," and notes that in addition to treating women differently because they are pregnant, it also takes away their rights to privacy regarding their medical decisions.

For women in Idaho concerned about their end-of-life rights, the lawsuit will hopefully prove that pregnancy shouldn't interfere with their ability to have their wishes heard. But even if the women suing the state are successful, there are still many other states that make similar exceptions: Alabama, Indiana, Kansas, Michigan, Missouri, South Carolina, Utah, and Wisconsin all have laws that invalidate pregnant women's living wills, according to Slate, while in Texas it is also illegal to "withdraw or withhold life-sustaining treatment … from a pregnant patient," in general, regardless of the circumstances.

Of course, there is clearly pretty obvious overlap between the desire for laws governing pregnant women's living wills, and for laws restricting women's access to abortion (in March, South Carolina, Indiana, and Utah also made Planned Parenthood's list of states that had introduced some of the biggest restrictions to reproductive rights in 2018 so far). But there's also one pretty big difference: the right to a living will is one that is supposed to apply equally to everyone. And when women in Idaho and similar states aren't pregnant, they do.

To argue then, that the rights a woman is otherwise entitled to should be revoked simply because she is pregnant is to literally argue that pregnant women do not deserve the same rights as everyone else. So even if your living will would stipulate that you would choose to remain on life support indefinitely in the off-chance that it would allow your child to be born? The fact that the law doesn't think you should have the same right to make that choice as every other adult is a reality that all women should find incredibly disturbing.