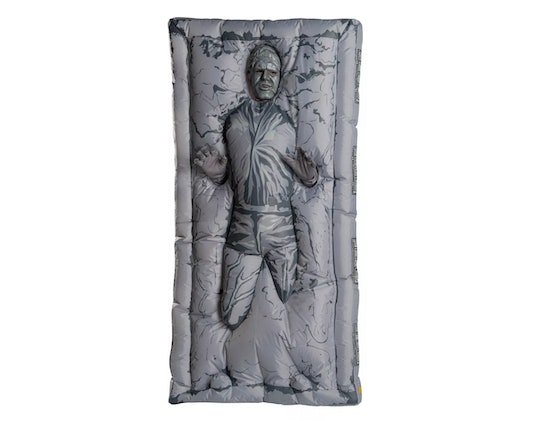 For Exhausted Parents, Target Has An Inflatable Han Solo In Carbonite Costume

Ever been to a costume party and thought, "This is cool, but I'd rather be napping"? There's just no good way to ghost on a party to nap. Well thank the gods of George Lucas, because fate has smiled upon us with this inflatable Han Solo in carbonite costume. It's basically the perfect incognito napping costume for anyone who's exhausted after all the apple picking and trick-or-treating. Part air mattress, part costume, the Han Solo in carbonite costume is available at Target now.

It's extremely perfect for new parents who are still in the stage of feeling obligated to go to things like Halloween parties (don't worry, this is only a phase), but yet are too tired to function on all cylinders. After all, Han Solo was not doing a lot of chitchat when he was stuck in carbonite. You can literally pretend to be a statue in this inflatable costume. I suggest your partner go as Atlas or the Central Park Angel of The Waters statue so that you might both remain silent, and have something soft to lean upon.

This Han Solo in carbonite inflatable costume is a little spendy at $76, but it comes with the backboard that resembles nothing so much as a pool float, a fan to keep it inflated, gloves, and a mask.

I am a pretty big Star Wars fan, but my love of the films is completely eclipsed by my husband, son, and daughter. They live and breathe the franchise. My daughter actually has a Rey costume and a Leia (Princess, not General) costume that she wears around the house and sometimes to friends' houses. She chose them outside of Halloween, just as something to hang out in when she's feeling particularly theatrical, which ends up being a lot of her spare time.

I think she fancies herself a bit of a JJ Abrams or George Lucas. She is always making her various Barbies and Star Wars action figures act out elaborate space operas via her Barbie's Winnebago with her brother's Death Star and Millenium Falcon. (Let me tell you, in a galaxy far far away in my Brooklyn home, the women are in charge, and there's nary a fanboy to whine about ruining the franchise. It's fantastic.)

If my husband bought this Han Solo in carbonite costume, she would flip her lid. It would be a dream come true, and I am not spouting hyperbole right now.

This costume would be excellent as a piece of one of any of several possible family-themed costumes. You could all do Star Wars, that's certain, or you could all go as statues, like I mentioned earlier. Good for the antisocial among us who would rather not talk at the party. Or, you could all go as Harrison Ford characters. Someone could be Indiana Jones, one of your kids could be Jack Ryan, one could be the president from Air Force One, and another could be The Fugitive. Imagine how cute and creative that would be. Or, you could go really meta, and all go as movie characters who have been turned to statues or stones in the film. Think Colin Creevy in Harry Potter, Mr Tumnus in The Lion, The Witch, and The Wardrobe, or any of the characters turned to stone in Rocky Horror.

However, the Star Wars costumes are all available as a family set on Target, which, arguably, makes the whole thing so dang simple. They even have a baby Obi Wan costume that is one of the cutest things I've ever seen. Yeah, maybe go with that.