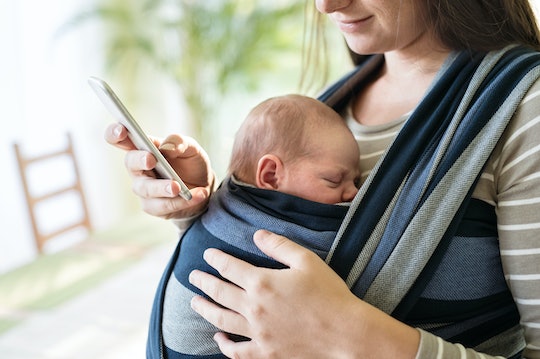 Ah, motherhood: the forever-celebrated yet hardly ever tangibly supported life choice many of us make. From your run-of-the-mill Mother's Day card to that probably over-priced handcrafted decoration you broke down and bought on Etsy, there's no end to the ways we, as a society, pontificate upon the beauty of motherhood. But an "inspirational" quote about motherhood has Twitter in an uproar; a sign that, hopefully, how we talk about a woman's choice to use her body to bring a human into this world is slowly, but surely, changing.

On Monday, Twitter user Jenny Hayes tweeted what can only be described as the most depressing representation of how moms are treated in the United States: a picture that says, "Once you become a mother you stop becoming the picture and start becoming the frame."

She aptly captioned the tweet, "This is some of the bleakest sh*t I have ever seen."

Hayes isn't wrong, though any mother can probably attest that this outlook on motherhood, while desolate, is hardly surprising. And the responses prove it: in a country currently ran by men who position themselves as "champions of life," we collectively treat mothers as if they're walking meat pitas made for stuffing babies into and, well, not much else.

Twitter user Lauren Grabowski responded to the tweet with a particularly disheartening story, writing, "I was in an AA meeting once where a woman shared, in tears, how she could not go another day 'being the glue stick to her kids while her husband got to be the glitter' and other moms in the room began crying. One walked out. Sh*t was bleak."

Another woman, Shanda, wrote, "This is literally how I feel struggling with post partum [sic] depression right now. Who the hell thought This [sic] was an inspirational quote?! Losing your personhood to becoming a walking talking milk machine is not something to be praised!!"

But in the United States, positioning motherhood as the ultimate display of worthwhile martyrdom is something we praise, and it is praised often. In a country without mandatory paid family leave, 25 percent of mothers are going back to work a mere two weeks after having a baby, are working outside of the home as much if not more than their male parent counterparts, yet doing the majority of the child-rearing and housework. A reported 85 percent of moms don't believe society understands them or supports them, according to Motherly's State of Motherhood Survey. The same survey found that 31 percent had postpartum sex with their partners before they were ready, and 45 percent say they need and want more help from work in the transition to parenthood. We're a "pull yourself up by your bootstraps" nation, hellbent on championing a silent resolve that does nothing but isolate us.

We don't need a survey to see how the responsibilities of motherhood have been weaponized in a way that negatively impacts those who make the decision to have children. We've been called "host bodies," by politicians hoping to regulate our bodies with anti-abortion laws, and we've watched as Republicans position motherhood as a necessity; the "Joan of Arc" life choice we must make for the good of the country. We're pressured to "have it all" as working mothers, then watched as two Republican officials decide to cut programs like Head Start by more than 50 percent, saying women should be married and stay home "at significant sacrifice," during their children's early years, rendering programs like Head Start obsolete.

We feel less like people and more like walking skeletons; just near-broken bones holding up the skin-covered meat sacks that once housed the precious lives so many people claim they value; lives we're now required to devote every second to while we also work full-time and make sure our bodies fit an unrealistic beauty standard and oh, never forgetting about #SelfCare as we make sure our significant others are sexually, emotionally, and mentally satisfied, but also keeping up with current events and staying in contact with friends.

The rise in maternal mortality rates in the United States aren't being meant with significant policies aimed at curtailing these startling trends, but with strict anti-abortion laws. The rise in prenatal depression, especially in younger women, isn't being met with comprehensive prenatal care that includes mental health care for pregnant women, but with a number of attempts to strip pregnant people and people with mental illness of their health insurance. The rise in moms choosing and/or needing to work outside the home (75 percent of women with children under 18 work full-time) isn't ushering in universal child care or more protections for working moms in the workplace, but instead the appointment of a president who, in 1994, said, "Putting a wife to work is a very dangerous thing."

And we feel it at home, when even our most well-meaning, feminist partners lay the burden of being a primary caregiver at our exhausted feet. When people notice the baby way before they notice us; when our employers assume we are less focused, less motivated, and less capable now that we're parents; when we adjust our careers in the name of "family life" while our partners continue to lie their lives as autonomous human beings, with thoughts, feelings, and goals that stretch beyond the bounds of parenthood.

In truth, we're not the picture and we're not the frame: we're the tiny, flimsy felt-covered cardboard stand holding the picture and the frame up. We're barely visible, but we're the reason anyone sees anything at all. We're the foundation for every other facet of life, but we're holding on by that tiny piece of felt-covered thread, clearly in need of additional support that's rarely, if ever, granted. We're aching for someone to hang the damn picture up on a wall so we don't need to hold it up all on our own.

More Like This
Moms, Just Eat The Fruit Dammit
My Parents Never Taught Me To Cook So I'd Always Need Them
The 4 Main Parenting Styles & Which Is Best For Kids
Meal Prep Sucks The Fun Out Of Food