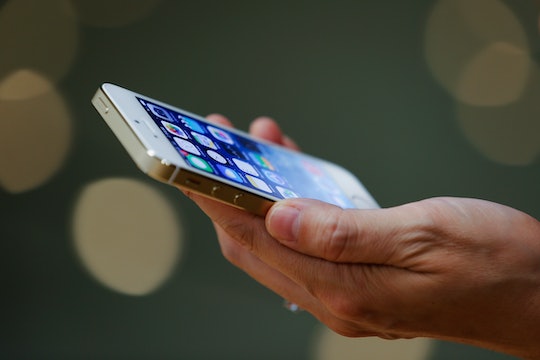 This iPhone Hack Could Literally Save Lives

Apple has a knack for changing how people live their lives. But this new this newly discovered iPhone hack, which allows users to call 911 with just their fingerprint, could actually save some. Yes, you can already call 911 through the lock screen in the case of an emergency, which is great. But in documents filed Tuesday with the United States Patent and Trademark Office, the tech company wrote that it wants to create technology that would read a series of fingerprints and applied pressure, thereby allowing someone to call emergency responders when "a conventional method may not be practical."

If it's anything like the fingerprint method to sign into your phone or make in-app purchases, that's definitely a game-changer. After all, aside from a few glitches now and again, it's usually pretty fast. Which means that in an emergency, you could call for help that much faster. It would also be a lifesaver for women who were being abused or assaulted — the mere mention of a phone call to police could incite an abusive partner, theoretically. This way, someone could call for an ambulance just by reaching into their pocket or bag and applying a slight bit of pressure without rousing suspicion. According to documents that Apple filed this week, that's exactly what the company intended it for.

Once a "panic command" is activated, the phone would call 911 and then immediately give the responders a user's location, and could livestream audio or video. In addition to that, the patent contends that the panic system would activate "other types of mobile command." Exactly what, it doesn't say, but the possibilities could be endless.

The technology would require a series of gestures, according to Apple. Like, "pinky finger-ring finger-pinky finger." This might sound tedious, but Apple's been thinking ahead. If an attacker forces someone to unlock or use their phone somehow, it could look like the person was complying with orders instead of actually calling 911.

Most attacks on women are perpetrated by people they already know, so any slick, efficient way to get help is always greatly appreciated. Earlier this year, for example, a savvy woman woman used an online Pizza Hut order form to cry for help while her boyfriend held her at knifepoint. Others have suggested that it would be useful for smart home devices, like Amazon's Echo, to be capable of making calls. (Right now, it can only make phone calls if the other end has Alexa hooked up to receive phone calls.)

So Apple is onto something, and it's a very good thing. Right now, the technology isn't available yet. But it should be, and hopefully soon.