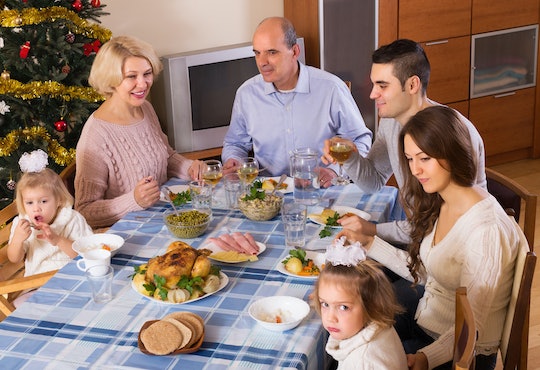 This Is, Hands Down, The Most Ridiculous Christmas Dish Of 2017

One of the coolest parts of parenthood — besides all the sappy forming-a-human-you-love-more-than-yourself stuff — is the ability to indulge your inner kid without looking completely unhinged. More than normal anyway. So as the mother of a 7-year-old daughter, when I saw the recipe for Barbie Salad, I knew it would be the perfect way to wow the crowd at our next family holiday dinner.

Debuted by the genius Anna Hezel and Gabriella Paiella in Lucky Peach, the Barbie Salad sought to combine the wistful pouffery of childhood Barbie cakes with, well, ranch dressing.

I tried to explain, seeming a little too desperate in hindsight, that once she saw the grandeur — once she fully understood the full vision of the Barbie salad — she would be glad she got on board

I never had one of those amazing Barbie cakes — you know the ones where there’s a real, legit Barbie doll surrounded by a flowing skirt of cake? I’ve seen them before and since, and always felt a little sorry for myself for missing out.

Now, there’s no way I would ever be able to pull off a skirt made out of cake, but a artfully arranging some veggies — even I could do that. And if it was a complete fail, I could just blame it on the kid. Foolproof. It was on for Thanksgiving dinner.

First, I tried to get my daughter, Laura, excited about the project. I showed her pictures online. She wasn’t impressed. She reminded me she doesn’t like salad and besides wouldn’t want all of that food slimming up her Barbie doll. I tried to explain, seeming a little too desperate in hindsight, that once she saw the grandeur — once she fully understood the full vision of the Barbie salad — she would be glad she got on board early. Laura responded by snatching up her Barbie, pulling it to her chest and backing out of the room in slow motion.

That would hardly be the last word on the Barbie Salad matter.

I cut a slit in the top of two heads of lettuce, stacked them and stuck Barbie’s legs in.

After a couple additional approaches, I put my foot down and demanded Laura let me use her Barbie. If it was returned to her damaged in any way, I promised I would pony up for a new doll. An agreement was struck.

I assembled my supplies: lettuce, grape tomatoes, carrots, radishes and a whole mess of toothpicks. First I made the lettuce skirt. Now, Barbie is a tall drink of water with long legs. Just one head of lettuce wasn’t enough to stabilize the doll and serve as a full skirt, so I cut a slit in the top of two heads of lettuce, stacked them and stuck Barbie’s legs in. The lesson here is to buy extra supplies.

Then I took a particularly leafy bit and wrapped it around Barbie’s tatas to mimic the bodice of the gown.

From there it was just a matter of accessorizing Barbie’s look. I tried to make radish roses, but they turned out pretty crummy. I used them around the bottom. Ribbons of carrot soaked in ice water and secured with toothpicks made the trim on the dress and matching hairpiece. Marc Jacobs, look out!

When it was time to serve the Barbie Salad, I sent it out with my daughter, because I am a coward. I mean it looked like something a 7-year-old made. There was no reason to let everyone seated at the table I spent hours on it.

The reception was mostly predictable. My sister-in-law loved it and said she was going to make one for her next work potluck. My husband and brother struggled to understand why anyone would want a salad made out of a Barbie. My mom loved it because she’s my mom. My mother-in-law, right on cue, tossed out her signature backhanded compliment, saying, “I wouldn’t want to eat it, but it’s fun.”

No one ate any.

Whatever. I don’t need everyone to get it. Take a look for yourself. My Barbie Salad is a work of art and was the conversation starter everyone needed. My Facebook friends thought it was fierce. We all need excuses to indulge our inner kid and this Barbie Salad was a fun way to mix up a holiday dinner. Try it and see for yourself on Christmas!

And if it turns out to be a disaster, just blame it on the kid.

More Like This
Can You Light Fireworks In Your Backyard?
35 Relatable Quotes That Prove Being A Mom Isn’t Easy
Ginger Zee Had A Perfect Response After A Troll Asked Her "Who's Raising Your Kids?"
It's A Beautiful Day In Jenny Slate’s Neighborhood