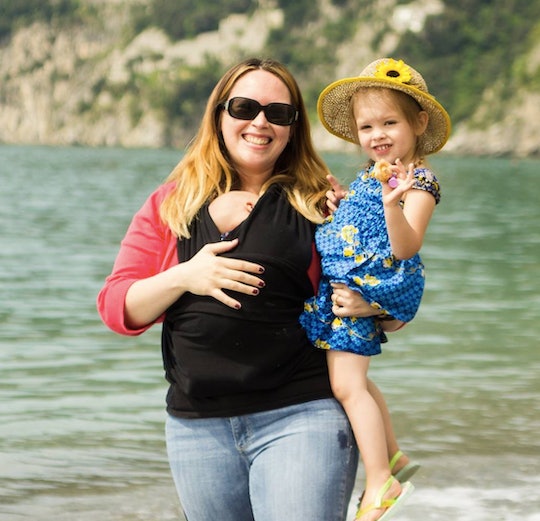 This Is How Being A Christian Shapes My Parenting

Growing up, I pretty much had freedom over whichever religion I chose to practice. My dad was Catholic and my mom was Lutheran, and I remember they both had Bibles with their names engraved in the leather binding – but going to church as a family just wasn’t our thing. I enjoyed that freedom because it meant I had the right to choose and experiment with what I liked when it came to practicing my faith. I wasn't forced to go to church on Sundays like some of my other friends were, but I also wasn't prevented from going. We had a Christian church down the corner from us, and my parents encouraged me to go if I wanted to when I was in my teens. Now, years later, those lessons have been integral to who I am as a mom. Being a Christian definitely shapes my parenting, and I hope that as my daughter grows up, they'll build their own relationship with God.

As a little kid, every now and then my grandfather would take me to his church, usually for Ash Wednesday or Christmas Eve, and I remember always being mesmerized by the pomp and circumstance of the Catholic church. The kneeling at the pew, confession, and the priests talking in Latin. I didn’t understand any of it, but I knew it meant something to my grandpa. He was also the only one in my family to really talk to me about Jesus. He wore a silver crucifix, and whenever I would sit on his lap I'd ask him about the man on the cross and he would tell me the story of Jesus. Years later, I still remember those moments. I still remember the conversations about religion that we shared.

Even though I flirted with religion back and forth throughout my teenage years and early 20s, I didn’t really find Christ till I was 25, even though I am certain he'd been chasing me from the beginning. Being a Christian for the last six years has really changed my perspective on a lot of things — things I either thought were silly or unimportant when I was younger, but now I care about deeply. And now that I am a parent, I wonder how I will teach my kids about God.

Before I had kids I told myself I would never force my kids to believe in something they didn't want to. Only now, here I am, a parent and a practicing Christian, and I want my kids to know and love God the way I do.

I have always been a proponent of free will; I mean, you can't be a Christian without first understanding that God grants us the freedom to choose him. He's not forcing us to love him, nor does he want that. But when I was a child, I didn't like all of the things my friends told me their parents made them do in the name of God. And with Christianity in particular, I didn't finding many examples of kids who took what they learned home with them from church. Even as an adult I know many people who went to Christian schools and went to church, and they are no closer to God than I was as a child. So, before I had kids I told myself I would never force my kids to believe in something they didn't want to. Only now, here I am, a parent and a practicing Christian, and I want my kids to know and love God the way I do.

At the very least, I want my daughters to know that God loves them. I believe it's such a fine line between teaching them to love God and guilting them into loving God that sometimes I don't want to teach them about religion at all. For me, it isn't a religion, it's a relationship, and ultimately that's my deepest desire for my girls, too: for them to have a relationship with God.

I'm not saying I want my kids to hit rock bottom before they find God like I did, but I do want them to know that in real life, no matter what they go through, I believe God is there for them.

But how do I do that? That's the question racking my brain lately. I have many friends who do things like Bible devotionals, prayer time, Sunday school, scripture memorization, and the whole nine, and I know that building a foundation is important, but how do I do it in a way that reflects what I've come to know about faith and God? Faith isn't automatic. It wasn't just something I could turn off and on like a light switch. I didn't come to God by reading the Bible or praying or attending Sunday school — I came to God through suffering, and by hitting rock bottom and realizing that with God, I could get back up on my feet.

I do have a little thing I do with my oldest when we're driving in the car. I pray out loud as we drive off to go run our errands. We pray for our family, her father, for ourselves, and for the day ahead.

I don't want them to walk this life feeling like God is above them, judging everything they do, so much so that they would rather not believe in him at all. I want to be able to communicate with them why we do some of the things that we do as it relates to our relationship with God, so when they ask, "Why do we learn scripture?" and "Why do we go to church?" I can give them something more concrete than, "because it's in the Bible." That never worked on me, so I want my daughters to have the chance to see God's love at work. I want them to know him like I have.

My girls are still young enough that I have a few years before we really put this into practice, but I do have a little thing I do with my oldest when we're driving in the car. I pray out loud as we drive off to go run our errands. We pray for our family, her father, for ourselves, and for the day ahead. And do you know what happens every time I ask her if she wants to pray with mommy? She screams, "No!!!!" I pray anyways, and the whole time during the prayer she screams "No, no, no!" I guess the joke is on me, right? It's easy to laugh it off because she's 3, but then it's also disheartening because I know kids her age who love to pray.

My hope is that as she and her sister get older, I'll be able to include more talks about God into our daily life. I'd love for them to go to church, Sunday school, to do Bible devotionals with me, and pray, but only when they're ready for it. I won't force this on them as the way they learn. My hope is that they'll find God on their own terms. But as I parent them, I'll also be conscious to remember to teach them to see God in real life, in everything that they do, every where they go, and even in the people they meet. I'll remind them that he's everywhere and always with them.

More Like This
34 Instagram Captions Perfect For Preschool Graduation Photos
17 Best Potty Training Products For Toddlers
From Captions To Gifts, These Are All The Kindergarten Graduation Ideas You Need
Fun Ways To Celebrate National School Nurse Day